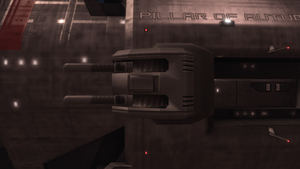 A Mark 33 Spitfire naval autocannon mounted on the side of UNSC Pillar of Autumn.

A naval autocannon, colloquially known as a naval coilgun and a mini-MAC, is an anti-ship coilgun turret mount which is installed on the warships of the CMA Navy and UNSC Navy. They typically fire guided shells against long-range targets, and inert kinetic kill rounds at short-range.[1] As their name suggests, despite their massive size and calibre, naval autocannons are capable of fully-automatic fire when necessary. This allows them to be used in some limited capacity for the purposes of point-defence if needed,[2] though this job is typically one left for the ship's point-defense guns. Naval coilguns are generally installed inside turrets in configurations known as batteries - with between two and four individual guns in a single emplacement.[3]

Naval autocannon turrets are most commonly found as the secondary armaments aboard the cruisers of the CMA and UNSC - with these vessels generally being the only ones large enough to mount a large amount of the massive turret installations. UNSC battleships do employ some autocannons though primarily focus on their much larger "super" MACs, while carriers may employ them in a limited capacity to augment their primary MAC in ship defence. Smaller ships such as heavier destroyers and frigates may also mount a smaller number of naval coilguns, with some corvettes integrating them entirely into the raw spaceframe of the vessel. One such vessel, the Lancer-class, has four LNT-450 naval coilguns built into the basic superstructure of the ship in a manner similar to that of the keel-mounted primary Magnetic Accelerator Cannons of larger vessels as opposed to the rotational turrets of its larger cousins. Naval coilguns are typically more prominent on the destroyers and frigates which do not see as much emphasis placed on their MAC systems - such as the Diligence-class light destroyer, Hillsborough-class heavy destroyer and Strident-class heavy frigate.

Naval autocannons had entered service by the late-24th century, with the Mako-class corvette equipping two and launched in 2388,[4] and continued to see refinement throughout the next 150 years into the 26th century. By the 2560s, they have become a standard armament of human-made capital ships.

Several lines of naval coilguns are employed in the naval forces of the Colonial Military Authority and United Nations Space Command - many of which have a number of models (usually denoted by "Marks" - eg the Mark 33 and Mark 40 Spitfire guns).

On page 39 of Halo: Warfleet – An Illustrated Guide to the Spacecraft of Halo, the Strident-class heavy frigate's Mark 55 Castor NCG is referred to as a railgun. This is presumably an error, as the weapon itself is referred to on the same page and in other sources as a naval coilgun. If this weapon does indeed canonically turn out to be a railgun, this may also indicate other "mini-MAC" artillery such as the Mark 2547 and Mark 2555 heavy railguns to also come under the naval autocannon schema.