"Flamethrowers" redirects here. You may be looking for the M6634 or M7057 flamethrowers.

The Hellbringers are an infantry specialization in the UNSC Marine Corps. Equipped with flamethrowers and deployed in two-person teams, Hellbringers are tasked with engaging entrenched infantry while suffering a high attrition rate.[1][3]

"Bringin’ the fire."
— A Hellbringer aboard Spirit of Fire[4]

Inspired by the use of flamethrowers in the trenches during World War I, the Hellbringers are specialized infantry of the UNSC Marine Corps outfitted with flamethrowers. Organized into squads of two, Hellbringers serve as anti-infantry.[1] Hellbringers are effective against infantry, even those garrisoned within structures. However, these Marines are of limited use against armored vehicles. Regardless, Hellbringers have proven effective at neutralizing dug-in Covenant forces and sterilizing Flood infestations.[3] Hellbringers are occasionally deployed to the battlefield via Single Occupant Exoatmospheric Insertion Vehicles.[5]

Flamethrower-armed personnel are not particularly common within the United Nations Space Command. As Hellbringers are deployed to engage only the most heavily entrenched enemies, these Marines tend to suffer heavy casualties.[1] As with all UNSC personnel who utilize flamethrowers in combat, Hellbringers are subjected to a battery of psychological analyses to determine their mental fitness for the role.[6] Hellbringers are generally regarded as brave, and "crazier" than most.[3] 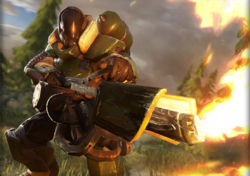 A Hellbringer with an M7057

"Flamethrower comin’ in hot."
— A Hellbringer aboard Spirit of Fire[4]

Hellbringers are qualified to maintain, operate, and deploy a number of specialist weapon systems in the UNSC arsenal. This includes a range of incendiary, thermobaric, energetic, chemical, and biological weapons that most UNSC personnel are not even aware of.[8] Although the United Nations Space Command has adopted thermobaric munitions for deploying most incendiary weaponry, Hellbringers most often operate with flamethrowers. These flamethrowers are capable of doing damage to close-range targets in a wide area.[3] During the first years of the Human-Covenant War, Hellbringers were often armed with the M6634 flamethrower, a variant of the NA4 flamethrower that supports a wide variety of fuel mixtures for use in various atmospheric and gravitic conditions.[1] The M6634 may be outfitted with an underslung M301 40mm grenade launcher which is often used to fire flashbang grenades; these grenades are used to incapacitate hostiles while the Marines move closer to engage.[4] By 2559, Hellbringers aboard UNSC Spirit of Fire utilized M7057 flamethrowers,[5] another, more modern variant of the NA4 flamethrower.[6] These flamethrowers can be upgraded with dispersion nozzles that increase damage and size of the flame sheets.[3]

Hellbringers wear a flame-retardant suit with an enclosed helmet that offers a wide field of view.[4] Flamethrower fuel is stored in a cylindrical tank attached to the Hellbringers' backs.[3] In addition to traditional flamethrowers, Hellbringers under Lieutenant Colonel Morgan Kinsano operate with Warthogs with a flamethrower installed in place of the typical machine gun. They also use an adapted Cyclops exoskeleton armed with two M7057 flamethrowers.[2]

Hellbringers, identified simply as "Flamethrowers", are a playable unit in Halo Wars that can be built from a Barracks for 100 resources and one population slot. Trained cheaply and quickly, Hellbringers are the UNSC's best anti-infantry unit. However, they perform poorly against armored vehicles and have no defense against air units. They need to get close to targets to engage them and thus can be easily dispatched by long-ranged units like Jackals equipped with beam rifles. Hellbringers have the following upgrades:

A good strategy is to make Hellbringers en masse and then transport them into combat via Pelicans. This helps cut their casualties when traveling, as they cannot defend themselves from long range. As a defensive strategy, many players lock their bases and train a large number of Hellbringers. If the enemy attacks with vehicles or aerial units, the Hellbringers cannot be harmed until released from the base. A good offensive strategy is to train the Hellbringers, as well as some RPG-upgraded Marines or ODSTs to protect them at range. Hellbringers are very useful against the Flood, though doing so is a major liability: They become infected more quickly than ordinary Marines and, when infected, become Infected Flamethrowers. These units can be exceedingly dangerous to infantry and can kill Spartans in seconds. The Arbiter and the Brute Chieftain are highly vulnerable to swarms of Hellbringers.

Hellbringers can be built by all UNSC leaders besides Serina at the Barracks. While they are effective against infantry and structures they do poorly against vehicles and cannot attack aircraft. In Blitz, Hellbringers cost 10 energy, while Wild Hellbringers cost 40 energy.

Cryo Troopers are infantry units exclusive to Serina that can be built at the Barracks. Like the normal Hellbringers they are effective against infantry and structures, but do poorly against vehicles and cannot attack aircraft. Unlike Hellbringers they will come equipped with energy shielding after the player has unlocked the Cryotech Advances leader ability. While they are able to chill and freeze enemies they do not do as much damage as normal Hellbringers. In Blitz Cryo Troopers cost 40 energy and come equipped with energy shielding.