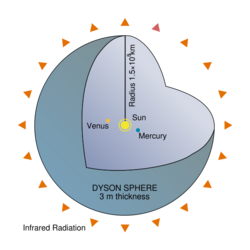 Diagram of a hypothetical Dyson sphere constructed in the Sol system.

A Dyson sphere is a megastructure or a series of structures meant to completely encompass a star for the purposes of solar power, or to serve as a massive habitat. The concept was originally described by the physicist Freeman Dyson as a system of orbiting solar power satellites meant to capture a star's entire energy output. Dyson speculated that such structures would be the logical consequence of the long-term survival of technological civilizations, and proposed that searching for evidence of the existence of such structures might lead to the detection of advanced intelligent extraterrestrial life. A three meter thick Dyson sphere with an Earth orbit radius would require an estimated 2.12057325 x 1023 cubic meters of material.

The Forerunners, being a Tier-1 civilization, were capable of building such constructs in various sizes and types, from full scale to miniaturized, planet-sized structures. The most commonly seen type of Forerunner Dyson construct is based on a variant of the concept known as a "Dyson shell"; a solid shell completely encompassing a star. They also constructed Dyson swarms, coordinated networks of orbiting constructs that form a sphere around a star, to close off entire systems.[1]

Most notably, Dyson spheres were the basis for the shield worlds built by the Forerunners as safe havens from the Flood and the activation of the Halo Array. However, the Forerunners never made it to the safety of these installations due to the betrayal of the AI Mendicant Bias, whose defection to the Flood forced the Forerunners to abandon their plans.[2] Basically, the structure fulfills its function as a "shield world" perfectly. It protects the occupants of it and gives them a huge "world" to live in. One such structure, The Sharpened Shield, was even moved into slipstream space where it would appear in a compressed form, far smaller than its actual size in the physical universe.[3]

At the core of the artificial world Onyx was a slipspace rift that shunted those that passed through it to a structured Dyson shell with an Earth-like, habitable inner surface. This construct was separated from a normal space-time symmetry by advanced Forerunner slipspace technology, making it only 23 centimeters in diameter in real space, despite being 300 million kilometers (or approximately two astronomical units [1 AU is 149,598,000 km]) in diameter on the inside. The Micro Dyson sphere was located in a factually compressed slipstream space. In other terms, any object inside might appear to be a certain size, but inside the Slipstream bubble it is much, much larger. This led Dr. Catherine Halsey to dub it as a "Micro Dyson sphere". The Dyson sphere's star has a spectra and energy output slightly smaller than the dimensions of Sol.[3]

The Forerunners also constructed a number of Dyson shells vastly different from the Onyx installation; also a type of shield world, these constructs are known as conservation spheres.[4] Unlike the Micro Dyson sphere within Onyx, the interior of this type of Shield World was a far smaller structure located in normal space, on the inner surface of an artificial planetary shell. Inside the shell was a network of ship-sized portals allowing access from an opening on the outside to the interior world.[5]

The interior possessed an artificial sun, though it and the entire structure were on a far smaller scale; while the Dyson sphere within Onyx was millions of kilometers in diameter, the diameter of this structure was a mere few thousand kilometers. This shield world also functioned as a military installation, housing the Apex Site, an internal docking facility for dozens of Sojourner-class dreadnoughts.[6]

The shield placed by the Forerunners around the San'Shyuum home system was a different iteration of the Dyson sphere concept, known as a "Dyson swarm". Instead of being a physical shell, the sphere was comprised of trillions of automatons known as vigilants, which constantly transitioned in and out of slipspace. Extending four hundred million kilometers from the system's star, any ships passing through the shield would require special access codes or be vaporized by the vigilants.[1]