From Halopedia, the Halo wiki
(Redirected from Assault Harness)
Jump to: navigation, search 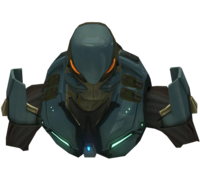 The Assault harness is an armor set of the Sangheili, and features a dynamic recharging energy shielding.

Much like the standard combat harness, the Assault harness is also designed to be intimidating and damage the enemy's psyche and morale. The armor was restricted from use when the Sangheili joined the Covenant, due to its startling effectiveness, and remained in use only in limited quantity. The restriction was abandoned when the Great Schism started.[1] Despite this, at least one bridge officer of a CAS-class assault carrier in Operation: WARM BLANKET wore it.[2]

The Assault harness shares a distant origin with some variants of the Ranger harness,[3] though both are now different armor systems.[4]

The helmet is completely sealed unlike the combat harness and its main feature is a rounded plate around their forehead and head. It then features a pair of orange goggle like lenses. Both mandibles are protected by an angular guard and features a neck ring to the back with a pair of lights on each side. Unlike most other Sangheili armors, this helmet only has two mandible guards instead of four separate ones. The helmet also has metal plates along the Sangheili's neck.

The shoulder pauldron is squared off with a simple set of shapes and rectangle plate with a roughly triangular form on each side. Due to the fact that they are square and feature a "trim" (the triangular plates), they are arguably more similar to Halo 2-era Sangheili Shoulders than Combat models are.

The thoracic cage of the Assault harness is nearly identical to that of the standard combat harness. The differences include a pair of clasps on each shoulder and a hexagonal piece armor set on the center of the chest.