The Covenant and its splinter factions make use of various types of drop pods for high-altitude troop deployment.[1] Much like the UNSC's Human Entry Vehicle, the Covenant's orbital insertion pods are used to drop infantry to the planet's surface as shock troops much faster and more efficiently than by means of a dropship. Drop pods may also be used as a fast and efficient means of boarding enemy spacecraft in lieu of a dedicated {{R'sisho-pattern Tickboarding craft]].[2][3]

Frontal and rear views of a single occupant pod.

The drop pods may be the most varied of the transportation methods used by the Covenant, with the types encountered by humanity representing only a fraction of the gamut of models in Covenant service.[2] On the most basic level, they can be divided into two main categories: small, single-occupant pods used mainly by Sangheili, and a number of types which allow the simultaneous deployment of multiple Covenant troops.

These vaguely coffin-shaped, five to six-meter tall pods are small and cramped, with barely enough room for one Sangheili and his weapon. The frontal hatch is equipped with a control panel, which may be used by the occupant to steer the pod. Upon impact with the ground, the pod's hatch blasts open, revealing the interior and allowing the occupant to exit.[4]

There are several variants of the insertion pod; one is cylindrical, with two tapered, slightly angular ends,[1] while the other is bulkier and ovoid-shaped. It is made of burnished cyan-purple metal, but has an opulent, white interior with a contour that conforms to the physique of a Sangheili.[4] 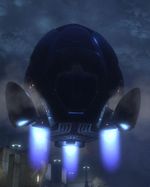 A type of multiple-troop drop pod used during the Fall of Reach.

Significantly larger than the single-occupant model, the multiple occupant drop pod has the capacity to deploy at least four Covenant warriors into battle. The pod is released from a ship, and freefalls through the atmosphere the same way the single-occupant version. When the pod is nearing the ground, it fires a series of downward-facing engines to slow it down. The hatches on the sides of the pod open some distance above the ground, allowing the infantry inside to exit the craft. Some models of multiple occupant pod remain on the ground like the single-occupant version after the combatants within have been deployed, while others rocket back to orbit, allowing them to be reused. Iterations of this type of pod were in use among Reformist San'Shyuum as early as the San'Shyuum-Sangheili War. These pods likewise had the capability to return to orbit and were equipped with force fields to hold their occupants in place during acceleration.[5]

A SpecOps Elite about to emerge out of his drop pod in Halo 3.

The single-occupant pods were the sole variety of Covenant drop pod featured in the games until Halo: Reach, which introduced the multiple-troop version. The pods made their first appearance in the Halo 2 E3 Demo, where the Elites came down and openly challenged John-117 with their energy swords. In the games, they first appear in the Halo 2's campaign level Outskirts and subsequently are present around Mombasa. They also appear in the campaign levels Sacred Icon, Quarantine Zone, and Uprising, occupied by allies of the Arbiter.

They also appear in the Halo 3's campaign level Floodgate, sent by the Shadow of Intent to aid John-117 and Thel 'Vadam against the Flood infestation in Voi. The impact is hard enough to break the occupying Elite's energy shield once it hits the ground. In Halo 3, one may enter the pods on the level Floodgate when playing on cooperative play as the second, third, or fourth player (an Elite), provided the pods are not shot at all. If the player approaches one and holds the Right Bumper, he can jump into the pod, as if it were a vehicle.

The Covenant drop pods make a return in Halo: Reach, in which they appear more rounded and bulky than the previous versions. The appearance of the drop pod changed dramatically from the E3 2010 demo to its launch version. In the E3 demo it appeared to be more boxy and angular, while the launch version is smoother, more detailed and is more like a wider version of the one from Halo 2.

In the campaign level Long Night of Solace, the Covenant Ceudar-pattern heavy corvette Ardent Prayer launches dozens of drop pods, which are destructible if the player can reach them in time. Destroying the pods, however, does not award kills or points. The daily challenge "Pod Kettle Black" is completed by destroying ten drop pods on the level Long Night of Solace. Interestingly, colliding with or ramming an insertion pod will destroy a fully-shielded Sabre and kill the player, despite the fact that the Sabre will typically survive a similar collision with a Banshee or Seraph. The death will register as "Collision Damage" and the player will receive a "Collision Damage" kill, but will not receive a Splatter Medal. Additonally near the beginning of the level, drop pods are used to drop Covenant troops near the Sabre base.

The multiple-troop variant of the pod is introduced in Reach; along with appearances in the campaign, these pods are frequently used by the Covenant in the game's Firefight mode. The multiple-occupant pod is referred to as a "teleportation drop pod" in the Halo: Reach Official Strategy Guide, although it does demonstrate teleportation abilities in-game. In Halo: Reach, it is possible to be killed by the multiple-occupant drop pod. It is also possible to get stuck at the top of the pod as the doors open. One can also get trapped inside the pod through a glitch.

During Spartan Ops, Covenant drop pods are often used by Jul 'Mdama's Covenant to send reinforcements to the battlefield during the Requiem Campaign.