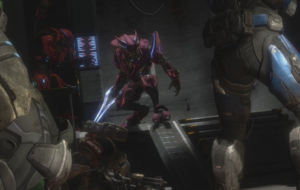 The Devoted Sentries was a crew of Covenant Zealots assigned to the Fleet of Valiant Prudence, tasked with the recovery of Forerunner relics. Members of the group were drawn from the Covenant's Ministry of Fervent Intercession and hand-picked by Supreme Commander Rho 'Barutamee.[1] The Devoted Sentries made up the entirety of the personnel within the fleet, though they were part of a larger chapter of Zealots.[2]

"There are those at ONI, myself included, who believe the Covenant dispatch Elite advance teams to hunt down artifacts of value to their religion. Survivor accounts suggest such teams are small, nimble, and almost always Zealot-class."
— Catherine Halsey debriefing NOBLE Team after their first encounter with the Devoted Sentries.[4]

In 2552, the Fleet of Valiant Prudence, led by Supreme Commander Rho ‘Barutamee, attacked a Human planet in the Beta Eridani system. After defeating UNSC forces, several Forerunner artifacts were uncovered. Processing them through a Luminary, the fleet learnt the coordinates of another planet rich with Forerunner artifacts, and quickly moved to secure it.[5][6]

By July 23, the fleet had arrived at the planet, which turned out to be planet Reach, a major UNSC base. That night, the Devoted Sentries attacked Visegrád Relay, severely disrupting UNSC communications[7][8] and attempting to find ONI data concerning the excavation of Forerunner artifacts.[4] The UNSC, believing that insurrectionists were responsible, sent Army fireteam 3 Charlie to retake the relay. When 3 Charlie was all but wiped out by Covenant forces, the SPARTANs of NOBLE Team were sent to Visegrád.[7] When NOBLE reached the relay, they were ambushed by the Sentries, and a brief firefight ensued in which two Zealots were killed by SPARTAN-B312 and Jorge-052. The Field Marshal who led the Sentries in the field escaped due to Carter-A259 not realising his significance.[8]

Several weeks later, one of the Sentries was present at a BXR Mining Corporation facility during the Battle at Szurdok Ridge, and was killed by SPARTAN-B312. [9] NOBLE would strike an even greater blow against the Sentries two days later, when Operation: UPPER CUT resulted in the death of Rho ‘Barutamee.[3][10] Despite this, the Sentries continued their mission. On August 23, the Field Marshal killed Kat-B320, the member of NOBLE who had devised UPPER CUT.[11]

On August 30, NOBLE recovered a fragment of the Smart AI Cortana, who had been studying data from a crashed Forerunner ship underneath SWORD Base. Dr. Catherine Halsey ordered NOBLE to deliver her to the UNSC Pillar of Autumn.[12] During the Battle of Asźod, just as NOBLE had completed their mission at the Asźod ship breaking yards , a CCS-class battlecruiser began moving against the Autumn while the Devoted Sentries attacked the Mark 2488 Onager providing the Autumn‘s cover. Emile-A239 was quickly killed, but at the cost of two Zealots. As the Cortana fragment was transported to the Autumn, SPARTAN-B312 moved to retake the Onager. After killing the Field Marshal and three Zealots, he destroyed the battlecruiser, allowing the Autumn to leave Reach with the Forerunner data.[13] Later that day, B312 was killed by one of the Devoted Sentries while making his final stand. However, it was too late. The failure of the Devoted Sentries to stop the Autumn‘s takeoff resulted in Humanity discovering Installation 04, and the subsequent collapse of the Covenant.[14]