From Halopedia, the Halo wiki
(Redirected from Visegrad Relay)
Jump to: navigation, search 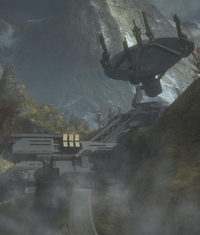 The Visegrád Relay,[1] also referred to as the Visegrád Communications Outpost,[2] was one of the three primary carrier hubs on the human colony world of Reach that connected the northern region to the planet's main communications station, and thus the rest of UNSC-controlled space.[3] It was situated 50 kilometers from the town of Visegrád.[2]

The Visegrád Relay, along with the rest of Reach's communications network, had been hardened to withstand internal and external sabotage after insurrectionists infiltrated the planet before Operation: CLEAN SWEEP. In addition, the relay had a "Level-5 communications package" installed before the onset of the Human-Covenant War. Later, the relay station was used as a base of operations by Professor Laszlo Sorvad, who led the ONI research of Forerunner artifacts recovered from a meteorite that had been found near Visegrád.[4]

Noble Team in the relay.

On the night of July 23, 2552, a small Covenant force including the Devoted Sentries landed in Visegrád and disabled the communications relay. In response, Colonel Urban Holland sent teams of UNSC Army troopers including 3 Charlie. However, contact with the teams was lost and they were declared MIA. The Office of Naval Intelligence theorized that the People's Occupation's ultra-radical wing may have sabotaged the relay. While ONI deemed the use of SPARTANs in the mission a misallocation of resources, Colonel Holland sent Noble Team to find out what happened to the teams, and to get the relay back online.[5][6]

Due to the gravity of the situation and the presence of Covenant forces, Noble Team found it imperative to proceed to the relay as fast as possible. As Noble Team arrived at the facility, it was under siege by Covenant forces. After successfully taking control of the facility, Noble Team managed to recover a survivor from the previous Covenant attack.[2] The data obtained from the consoles was later transported to Dr. Halsey at ONI Sword Base[7] where it proved vital in decoding the data from the Forerunner excavation there weeks later.[8]