"I love Halo. Still. But I seem to have a bad track record of turning existing franchises into films. haha, Do I love the world? Master Chief? Reach, the Colonies, the Flood, the Covenant? YES. Am I going to end up directing a piece in that world? probably not--meaning no one is asking me."
— Blomkamp on the possibility of directing a Halo film[1] 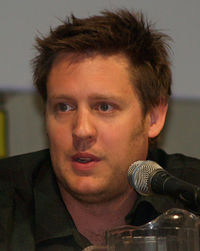 Neill Blomkamp is a South African, Vancouver-based director of short films and advertisements. He is known for directing three short live-action films collectively known as Halo: Landfall for Halo 3.

In August 2006, he was selected by Peter Jackson and hired by Microsoft to direct the film adaptation of Halo, which was due for release in summer 2008 prior to its indefinite hiatus[2].

While the film production was put on hold, Blomkamp directed three short live-action films collectively known as Halo: Landfall to promote the release of Halo 3[3].

When plans for the film eventually fell through, Jackson and Blomkamp instead started production on District 9. Many elements from the cancelled Halo film were re-used or adapted for District 9, including the basic Warthog and Pod infector designs[4].