From Halopedia, the Halo wiki
(Redirected from Assault carrier)
Jump to: navigation, search

"Look at the size of that thing!"
— Edward Buck after an assault carrier arrives over New Mombasa.[6]

The CAS-class assault carrier[1] is a large capital ship used by the Covenant. The CAS is designed for ship-to-ship combat, command and control of fleet operations, and close atmospheric support for ground occupation forces. Such vessels are typically deployed during invasions of worlds with high strategic value.[7] 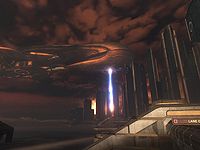 The CAS-class has a length of 5,347 meters (17,540 ft), a beam of 2,118 meters (6,950 ft), and a height of 700 meters (2,300 ft). This makes it the second largest ship of the line the Covenant navy employed throughout the Human-Covenant War. Although the CAS-class carrier's keel length is inferior, its width and volume are in the realm of twice as large as even the UNSC's prototype flagship UNSC Infinity, the largest vessel in human history.

The class' hull is comprised of nanolaminate plating; however, its greatest assets are its energy shields, which are amongst the strongest in the Covenant fleet. During the opening hours of the Battle of Earth, the Prophet of Regret's flagship Solemn Penance was able to penetrate Earth's orbital defense grid in spite of Cairo Station focusing fire on it.[8] Furthermore, Rtas 'Vadum employed the tactic of ramming CCS-class battlecruisers during the Battle of Installation 00 with no visible damage being inflicted upon his flagship.[9] A further testament to this vessel's survivability is that it was selected by the Covenant alongside the much larger CSO-class supercarrier to serve as the Hierarchs' personal flagships when they were not aboard the also heavily shielded High Charity.[7] Like most Covenant vessels, the command deck of the CAS is buried deep within the vessel's deck, allowing it to function even with the vessel taking tremendous damage. 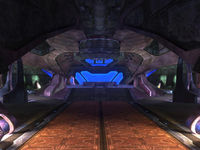 The bridge of an assault carrier.

Assault carriers, like the majority of Covenant ships, are characterized by their bulbous, whale-like front, sleek silhouette and pale white-blue hull. However, they also tend to be characterized by their unique swollen and bulbous "hooked" bow section that is frequently characterized to be similar to the head of a whale and would (theoretically) be a massive weakness as the ship could be blown in half comparatively easily, given its shields were down. Rather than possessing multiple smaller hangar bays, like smaller cruisers, assault carriers use a single, gargantuan hangar bay for storage of fighters, dropships, boarding craft and small capital ships, at least 500 meters long, 320 meters wide and 120 meters high. There is a second hangar bay visible, near the stern of the carrier, above the main engines.[9]

The assault carrier is also fitted with Modular Dispersal Technology, giving it the ability to completely detach sections of its outer hull as well as whole corridors, as seen during Operation: WARM BLANKET. They can also separate into two distinct sections which leaves the rear section (with the main engines) behind and allows the fore-section to move away with previously hidden engines, the fore section, and likely the rear, are still slipspace-capable. Unlike its unorthodox means of use by the Fleet Master in an attempt to disperse the advancing SPARTAN forces, the dispersal feature is actually intended to be used in order to detach sections of the carrier that sustained extensive damage in order to increase the chances of saving what is left of the ship and its crew for future use.

The "S", or Salvation, in the carrier's three-letter classification code, "CAS", indicates that the CAS-class assault carrier is a dedicated warship.[11]

For propulsion, assault carriers rely on large deuterium-tritium pinch fusion reactors, housed in cavernous chambers,[8] which power the ship's vital systems, as well as the three aft-mounted repulsor engines that propel the ship, capable of operating in a vacuum or in an atmospheric environment. They also employ non-reactive gravity drives for standard maneuvering and hovering above the surface of a planet, resisting its gravity.

The vessel is propelled by three massive engine units, and possess, like all Covenant vessels, the ability to make pinpoint slipspace jumps in atmosphere. As shown in the Battle of Earth, such slipspace jumps cause massive discharges of EMP, rivaling those set off by nuclear devices.[12]

The CAS-class' exact crew size and complement are unknown, however its size and combat records suggest a crew of thousands. The ship's living quarters which consisted of habitat domes, hunting grounds, and places of repose for the ship's permanent crew, is located in the lower bow section behind the energy projector.[13] A single CAS-class assault carrier is capable of deploying a military force sizable enough to secure an entire 26th century city.[14] The class' cavernous main hangar has the capacity of carrying hundreds of Seraph multirole fighters, Banshee attack craft, Type-52 Phantom and Type-25 Spirit dropships, and boarding craft.

Supplementing their considerable infantry detachments, each assault carrier holds large fleets of Ghosts and Wraiths, along with a number of Scarabs. In November 2552, the UNSC frigate Forward Unto Dawn docked inside the launch bay of Shadow of Intent, an assault carrier, demonstrating the immense size of the class.[15] The class is also fitted with Covenant escape pods.

Assault carriers are often used as flagships, leading Covenant fleets into battle. Though designed for planetary combat, they also excel at ship-to-ship combat, possessing multiple pulse laser batteries, plasma turrets, and at least three energy projectors.[8] Along with the larger CSO-class supercarrier, the CAS is designated a "Class-Five flagship carrier" by the UNSC due to its common use at the center of fleets.[7]

Given the similar design and purpose of the CAS to the CSO-class supercarrier it is possible that light cruisers may even be capable of using the CAS as a refueling depot in the absence of repair and resupply stations like Unyielding Hierophant. Like many vessels in the Covenant fleet the vessel was capable of rapidly deploying Covenant soldiers to the front with the use of orbital insertion pods. Like most Covenant ships, they also possess gravity lifts, used for ferrying supplies, personnel, and vehicles from the ship and to a planet's surface.[14][16]

As some of the largest ships in the Covenant fleet, the CAS-class are favored as flagships by both Sangheili commanders and Prophet Hierarchs. As well as their exemplary shielding the vessel is also presumably amongst the most heavily armed in the Covenant. Assault carriers possess multiple energy projectors on its ventral and dorsal surfaces which are powerful enough to cut through UNSC capital ships.[8] They also possess multiple pulse laser turrets, which are used for intercepting enemy missiles and fighters, and plasma torpedoes for engaging in ship-to-ship combat and assaulting planetary defenses.[9] There is also some variety within the assault carrier class; individual assault carriers sometimes possess differing capabilities in terms of defenses and armament.[17]

Throughout the war the CAS proved to be superior to human vessels in both durability and firepower, with the vessel being capable of easily destroying the much vaunted Marathon-class heavy cruiser with a single blast of its dorsal energy projector.

The massive launch bay of the assault carrier.

The CAS-class assault carrier had entered production at least by 2142.[18] The Battle of Bliss saw the first known deployment of the CAS-class assault carrier during the Human-Covenant War. Five of these vessels alongside the smaller but more numerous CCS-class battlecruisers and CPV-class heavy destroyers attacked and glassed the world resulting in the deaths of all five hundred million citizens of Bliss.[19] Over the next two decades of conflict the assault carrier would grow to be known as one of the most fearful inspiring vessels in the Covenant armada.

After the destruction of the CSO-class supercarrier Long Night of Solace at least three such vessels led the Covenant reinforcement fleet to assault the planet Reach. During the ensuing Fall of Reach these vessels alongside hundreds of others would lead to the destruction of humanity's largest and most well defended colony. At least one assault carrier was present at the Battle of Tribute.[20]

Months later two such vessels led the Fleet of Sacred Consecration to Earth, where they engaged the UNSC Home Fleet in orbit above Africa. The first one, carrying the Prophet of Regret himself, managed to penetrate Earth's orbital defenses. The second attempted to follow, but was subsequently destroyed by SPARTAN John-117.

The Prophet of Regret's assault carrier Solemn Penance fled to slipspace, as the UNSC forces were likely to recapture the city of New Mombasa with the UNSC In Amber Clad following close behind in its slipspace wake, leading human forces to Installation 05.

Another assault carrier, Shadow of Intent, later became the flagship of the Fleet of Retribution. Rtas 'Vadum, in command of the ship, led his fleet to Earth in pursuit of a surviving Flood ship, arriving in time to glass the infected area of the planet. Shadow of Intent and its escorting cruisers joined the remnants of the UNSC Home Fleet to launch a joint attack on the Covenant at Installation 00, destroying their fleet and providing a distraction while ground forces engaged Truth's loyalists that had landed on the installation. It later evacuated the UNSC and Sangheili personnel and returned to Earth for a short time before returning to Sanghelios.

By 2554, Jul 'Mdama, a shipmaster and leader of the revived Covenant commanded the assault carrier Song of Retribution during his attempts to enter the Forerunner shield world Requiem.[21] Three years later, the Song of Retribution led a fleet of numerous CRS-class light cruisers.[22]

The Banished possess at least one assault carrier, Enduring Conviction, commanded by Shipmaster Let 'Volir. However, it was destroyed above Installation 00 by Aggressor Sentinels that were activated by defense network system after Jerome-092 and Isabel hijacked the ship to fire its energy projector on the installation to trigger the network.