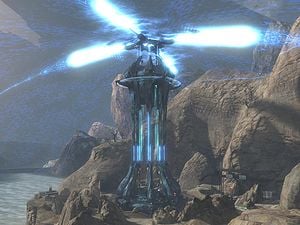 One of the many Spires placed on Reach.

Deployment spires are Covenant structures that serve as bases of operation during ground engagements.[1] They function as teleportation hubs for invading forces, and are also capable of projecting energy shields over a large radius. Covenant forces utilize these teleportation spires during large-scale operations.[2][3][4]

Deployment spires are Covenant designs, poorly-based on slipspace translocation technology originally created by the Forerunners.[5] They are designed to transport materiel and personnel seamlessly through portal networks. Typically, a deployment spire is established as a ground base on a given world and linked to an orbiting capital warship such as a carrier.[1] Troops teleporting through the spire commonly utilize an air vehicle, generally a dropship such as a Phantom, as the objects being teleported will materialize in the space between the upper and lower main sections of the structure.

The spire itself consists of multiple sections: a lower section which projects several energy beams that keep an upper section suspended high above it as well as powering a floating shield-generator array. From the upper level, a large dome-like energy shield is extended to the ground. This shield is resistant to conventional weapons, and is capable of disabling any enemy vehicles that pass through it via application of an electromagnetic pulse.[2] They can be selectively permeable, and are engineered in such a way as to allow the passage of small vehicles and personnel.[6] There are two ways to reach the top of the Spire: via the same gravity lifts that hold the upper level aloft, or off one of several lifts positioned at intervals around the Spire.[7] A spire's gravity lifts are extremely powerful, and are as such capable of being used in a manner similar to that of a space elevator - ferrying troops and materiel from ground the space (and vice versa) over massive distances.[8]

Unlike most other forward operations structure and vehicles, Spires do not have an easily accessible reactor core like Deutoros-pattern Scarabs or Cheru-pattern Tyrants. The shield itself is powered by a pinch fusion reactor, and requires a warship-level weapon to deplete or collapse.[6] The shields generated by the Spire must be deactivated manually through a control interface in the upper portion of the structure.[2]

Covenant spires are presumably deployed from starships and dropped directly onto their intended location; this is evidenced by at least the nature of the only Spire known to be ever observed at close range, Spire One. The Spire's base lay partially buried at the center of a massive crater, surrounded by blasted sand. This may have resulted from it being dropped from a great height.[2][7]

Despite their usage, the rough imitation of Forerunner systems makes Spires a dangerous and enormously inefficient system. As such, they were rarely employed by the Covenant at large.[1]

A deployment spire may have been employed during the Battle for Arcadia in 2531. During the ground campaign, a large dome-shield was projected by the invading Covenant forces over the Forerunner complex on Arcadia, allowing them to construct a large base and a Type-29 Scarab beneath the shield's protection. The shield was ultimately partially disabled by combined artillery fire from a battery of M145D Rhino, allowing for a large orbital bombardment by UNSC Spirit of Fire.[9] The shield generated in this engagement exhibited many similar properties to that of the deployment spire, though whether it was the site of such a deployment is unknown.

Multiple spires were seen during the Covenant invasion of Reach. Covenant ground forces deployed these behemoth structures to cloak the presence of an army deployed by the supercarrier Long Night of Solace, flagship of the Fleet of Valiant Prudence. One of these Spires were disabled and destroyed in a UNSC counter-offensive operation.[2]

A similar energy shield structure is encountered in the Halo Wars level Dome of Light. This structure may be a different version of the spires used on Reach.