The Skirmish on Mona Lisa was fought in the Soell system within Installation 04's debris field aboard the ONI-commissioned civilian prisoner transport Mona Lisa on October 25, 2552.[1] Having suffered a catastrophic Flood outbreak as a result of the actions of the ONI operative John Smith, the ship was later boarded by an ill-fated Marine unit and destroyed only hours afterward.[3]

The ONI operations codenamed RED CLOUD and WHITE SAND were linked with the engagement.[4]

Following the return of the survivors from the Battle of Installation 04 in September 2552, the Office of Naval Intelligence learned about the Flood parasite. In order to study the possibility of controlling the Flood and turning it into a weapon, a science team headed by Major John Smith was authorized to take command of the civilian prison vessel Mona Lisa. After bringing a group of Covenant prisoners aboard, they would jump into the Soell system, where they recovered living samples of the Flood from Installation 04's debris field.[5][6]

Smith began to conduct tests on both Covenant and human prisoners; he may or may not have exceeded his operational parameters when doing so.[7][8] However, sufficient security measures were not taken and the parasite escaped containment. Though the specifics of the outbreak are unclear, prisoner Patrick Rimmer suspected that the Covenant attempted to escape and the Flood broke out in the chaos. Some of the Covenant would also let human prisoners out of their cells in order to enlist their aid in combating the common threat of the Flood. One of the Covenant sympathetic to the human prisoners was a Sangheili who Patrick Rimmer called "Henry".[6]

The Flood would soon overwhelm the ship, with prisoners and guards desperately attempting to hinder the parasite's progress by building makeshift barricades.[9] Meanwhile, Smith launched most of the ship's escape pods to prevent the Flood from escaping, and subsequently locked himself in a sealed safe room.[10] Eventually, the Flood would claim most of the people aboard the ship, with only a handful of uninfected survivors remaining.[6] Shortly after breaking out, the Flood would begin to accumulate biomass to form a proto-Gravemind around its slipspace drive in the engine room, with the intent of absorbing a sufficient amount of knowledge to allow them to escape the system.[11]

The Marines' Pelican departs from the Red Horse.

Shortly later, the Office of Naval Intelligence dispatched a prowler, the UNSC Red Horse, to the Soell system, with the apparent mission to "jump to coordinates classified higher than top secret, retrieve samples of an alien artifact for study, conduct basic recon, expect Covenant trouble."[12] However, none of the crew, including the ship's CO Commander Tobias Foucault, were informed of the Flood. ONI also had the ship's old AI, Chauncey, removed and replaced by the secretive ONI AI Rebecca.[13]

By the time the Red Horse arrived, the Covenant fleet that had been present in the system had left in pursuit of what UNSC intelligence assumed was a "higher value target".[14] After sifting through Installation 04's debris field for three days, occasionally conducting reconnaissance missions via Pelicans,[15] the crew of the Red Horse discovered an escape pod launched six hours earlier from the Mona Lisa. In the pod they discovered a fatally-wounded human prisoner who indicated that something horrific has occurred aboard the Mona Lisa, something that led to the deaths of its entire complement of crew and passengers and left himself gravely mutilated. Rebecca then revealed Foucault the "extended" mission parameters; they were to assess the status of the Mona Lisa, with the orders to destroy the ship if it had been "compromised beyond retrieval".[16]

Clarence and two Marines fire their assault rifles during the initial skirmish aboard the Mona Lisa.

A detachment of 18 Marines led by Sergeant Zhao Heng Lopez was then sent on the Mona Lisa, accompanied by a covert ONI Section 3 operative, Clarence, whose orders were to leave none of the original occupants of the ship alive.[17] Around this time, the Red Horse detected a single Covenant assault carrier[18] in the system, leaving the Marines on their own as the Red Horse was forced to limit its maneuvering and communications to a minimum out of risk of being detected.[19]

Boarding the ship via a cargo bay, Lopez's squad was first engaged by a small group of Sangheili, all lacking armor or weapons, and dispatched them with ease. During the skirmish, one of the Marines, Rabbit, went missing. Lopez ordered four Marines; Cranker, Maller, Simmons and Sydney, to guard the Pelican while she took the others to find Rabbit, who was soon found dead. Meanwhile, the Marines left in the cargo bay were attacked by Pod infectors and dropped out of contact.

Lopez then contacted the Red Horse, now receiving new orders to enact the Cole Protocol by purging the Mona Lisa's two navigation databases. The Marines formed two parties; a team led by Lopez consisting of MacCraw, Mahmoud, Percy, Rakesh and Singh, and another one led by Corpsman Ngoc Benti with Clarence, Gersten, Orlav and Tsardikos. Lopez's group would head to the primary NAV database located on the bridge while Benti's team would go after the backup data in the engineering. At this time, the Marines also noticed that one of them, Ayad, had disappeared.[20]

When scouting an infirmary on their way to the bridge, Lopez's team discovered a safe room, finding John Smith inside. Smith, not revealing his true identity, claimed to be the ship's medical officer while continuously insisting they should leave the ship immediately, but his pleas were ignored by Lopez.[21] Meanwhile, Cranker and Maller, who had been repurposed as Flood combat forms, approached the Marines' Pelican. The pilot, Burgundy, assumed they were injured and opened the rear ramp, only to be attacked by the two who then proceeded to drag her through the ship toward the proto-Gravemind in the engine room.[22] 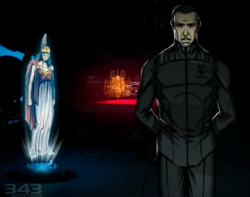 Rebecca and Foucault on the bridge of the Red Horse.

When cutting through the ship's recycling plant, Benti and her team were attacked by a group of Flood. As they were being chased by the Flood, Tsardikos fell behind and was immediately killed. Soon after, Orlav was infected and bit Gersten before being shot by Clarence. The rest of the team then made it to safety in a maintenance room, where they encountered Patrick Rimmer and his Sangheili companion, "Henry", armed with a cricket bat. Here, Gersten began to show symptoms of infection and was promptly executed by Clarence.[23]

On the Red Horse, Commander Foucault, still unaware of the threat aboard the Mona Lisa, prepared to have Sergeant Fugazi and two squads sent to the Mona Lisa in order to reinforce Lopez's squad, which had dropped out of contact. Rebecca, however, pointed out that their orders were to destroy the Mona Lisa immediately if contact with the recon team aboard was lost. The AI then showed the Commander the true nature of the Flood in order to convince him.[24] Upon seeing recordings of the Flood from Installation 04, Foucault withdrew his order to send more Marines, but would still remain reluctant to fire upon the Mona Lisa with Lopez's squad on board.[25]

After finding a Flood growth in a recreation room, Lopez began questioning Smith, who first claimed that the Flood was a Covenant virus that had transmitted into human prisoners. Shortly later, Rakesh was killed in a sudden Flood attack. Lopez, having grown agitated of Smith's reluctance to cooperate, hit him and had one of her Marines search him, soon discovering his true identity and rank. As Lopez still refused to leave the ship, Smith unexpectedly killed Mahmoud and made his escape,[26] eventually making it to the Marines' Pelican and escaping the ship.[27]

Percy and Singh were killed by a combat form that had been Ayad before Lopez's team reached the bridge, leaving only the Sergeant and MacCraw. On the bridge, Lopez contacted the Red Horse, learning that Foucault was preparing to destroy the Mona Lisa with a Shiva warhead immediately once Smith was aboard the Red Horse, as the Major's Pelican had attracted the attention of the Covenant ship which now changed course, bearing down on the Red Horse. Lopez and MacCraw then began to make their way to the two escape pods still left on the lower deck.[28] 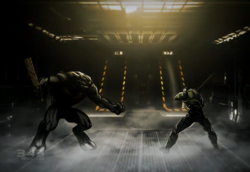 The final standoff between Henry and Lopez.

Meanwhile, Benti's party made it into the engine room, where they discovered the proto-Gravemind and witnessed Burgundy being merged with it. At the same time, Lopez's exchange with the Red Horse rang through the Mona Lisa's PA system, driving the Flood into a mad frenzy. Benti then used a pair of fragmentation grenades to destroy the proto-Gravemind, also causing the ship's slipspace drive to destabilize.[29]

The Marines eventually regrouped outside the airlock with the two remaining escape pods, learning that each could only hold a single occupant. As Lopez and MacCraw held their ground at the airlock, the rest of the survivors arrived, with "Henry" carrying an injured Benti. Suddenly, Clarence executed Rimmer and trained his rifle on an infuriated Henry, revealing his status as an ONI agent. In the ensuing standoff, MacCraw suddenly escaped in one of the escape pods, abandoning the rest of the survivors. Simultaneously, Benti pushed herself and Clarence into an approaching horde of Flood.[30]

Holding off the Flood mob, Lopez and "Henry" then entered the airlock. Realizing only one of them could escape, Lopez proceeded to shoot Henry, only to find that she was out of ammunition. The two would then fight for the last escape pod, with thirty seconds left until the Mona Lisa was destroyed by the Shiva missile.[30] It is apparent that both "Henry" and Sergeant Lopez were killed before either could escape the Mona Lisa; no Sangheili was listed in the Red Horse's records following the event,[31] and Lopez was designated KIA on October 25.[1]

With the Mona Lisa destroyed, the Flood was successfully contained again, preventing it from escaping the system and spreading throughout the galaxy.

Time stamps based on UNSC Military Standard Time exist for most of the key events during the Marines' mission aboard Mona Lisa on October 25, 2552.[1]