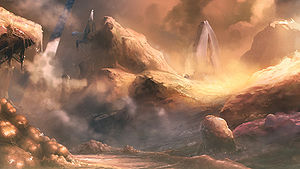 "The Flood can survive and grow in almost any environment, but it thrives in a surprisingly narrow band of habitability. The interior of Flood hives provide a controlled environment for accelerated growth, but in time an entire planet's biosphere can be altered to approximate these ideal conditions."
— Phoenix Logs[1]

Blightlands are Flood-infested areas which serve as the first step in the process of converting an environment to suit the Flood's biological needs. Flood hives develop specialised forms which harvest vitality from the soil, absorb solar energy and consume native life. These zones are eventually consumed to provide raw material for Flood spore mountains and Flood "organs" that finish a planet's ruination. Cocooned bases can often be found at the heart of Blightlands.[2]

An infected Sangheili in the Blightlands on the outer surface of the Etran Harborage.

Prior to 2531, a Flood outbreak on the surface of the Etran Harborage had led to the establishment of Flood Blightlands across the shield world's outer surface. The infection of humans from the UNSC Spirit of Fire and Covenant forces would lead to the establishment of Flood dens, hives, nests, colonies and, most importantly, a Proto-Gravemind. The shield world's destruction would ultimately destroy the blightlands here.

Following the destruction of High Charity in the Battle of Installation 00, the gargantuan Flood hive's ruins were quarantined by the installation's Sentinels. Approximately three-hundred meters away from the perimeter, life stopped growing and the area was absent of any kind of noise.[3] For seven years, the Flood inside the quarantine zone would continue to fester until the shield was broken by Voridus during the Second Ark Conflict, hoping to salvage old war-era Covenant equipment from the ruins of the city. The Flood would quickly escape this breach and begin turning the area surrounding the destroyed ruins of High Charity into a blightland, eventually cocooning UNSC and Banished bases and establishing a new Proto-Gravemind. The Gravemind would eventually be destroyed by Banished Mega turrets, however, and the Sentinel network activated to reenact the quarantine of the facility.