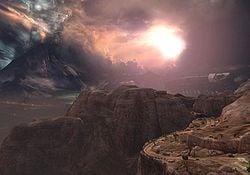 Landscape at Asźod during the Fall of Reach

Asźod was an arid, mountainous,[1] barren and unpopulated territory[2] in Ung, Alfold on the Eposz continent of Reach.

Sometime between 2525 and August 2552, the UNSC Commonwealth was under deconstruction within the shipyards.[5] As well, the Reach Tourism Board chose the plains at Asźod for their "Escape." ad.[6]

During the final stages of the battle, Asźod was the only off-planet extraction point left on the continent.[7]

It was also where the UNSC Pillar of Autumn was dry-docked on August 30, 2552. It was the site of the Battle of Asźod, which saw Emile-A239 and SPARTAN-B312 successfully delivering a fragment of Cortana to Pillar of Autumn. While Emile would perish, SPARTAN-B312 stayed behind to defend Autumn from[3] a converging Covenant battle group.[8] Below the drydock, near a small set of warehouses in between two pipelines was where many dead Spartans were found.[4] B312 was killed in action while making a last stand there, having been overwhelmed by Covenant infantry.[4]

In 2589, Asźod appeared to be the location a colony ship landed at to colonize the reterraformed Reach once again.[4]

It is named after Aszód, a town in present-day Hungary.