Silver Team is a Spartan-II unit under the Asymmetric Warfare Research Group in the United Nations Space Command.[3] Silver Team operated from WHITE TOWER on Reach, where the team resupplied and conducted briefing for missions further out from Reach.[1] 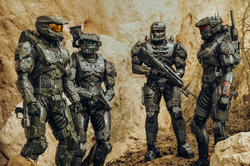