For the AI construct, see Black-Box.

In Halo Wars, Black Boxes are collectibles in the campaign that when collected, add new events in the Halo Wars Timeline. They look like black boxes with yellow stripes on them, and can be picked up by any unit. When the player collects one, they can just resign straight away and will still have it. Aerial units are the easiest and most direct way to collect them.[1]

In aviation, the term "black box" refers to both flight recorders on commercial and other aircraft. The flight data recorder is responsible for recording flight parameters and the cockpit voice recorder is responsible for recording all communications in the cockpit of an aircraft in flight. The phrase has become popularized by modern media reporting on aircraft crashes.

Head back to the last bridge you crossed before reaching Alpha Base's gate and peek underneath. The crate is below the arch, next to an overturned Warthog. You can drive down the small ramp to the left to reach it. 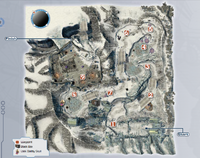 A map of Alpha base, showing the location of the black box

The UNSC support ship Spirit of Fire enters orbit
around Harvest. While Admiral Cole's fleet is
engaged elsewhere, Spirit is sent to Harvest to
investigate ongoing Covenant activity in the
system and look for survivors from the missing
UNSC Destroyer The Prophecy [previously
dispatched to Harvest to investigate the same
activity]. Commanded by Captain Cutter, Spirit has
been reassigned by FLEETCOM. ONI has placed
Professor Anders onboard to lead the investigation.

This black box is located northwest of the second base. There is an area blocked off by an energy shield. Destroy the power source with some infantry, and both the crate and a good chunk of supplies are yours for the taking. 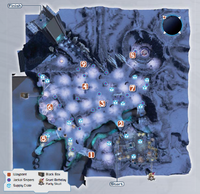 A map of Relic Approach, showing the location of the black box

Spirit of Fire holds service for the crew of the
Prophecy. The crew roster is read despite
objections from ONI personnel. The Prophecy was
lost with all hands on a first expedition to Harvest
to investigate the Covenant interest in the artifact
found near the polar region.

This black box is located right from the beginning of the mission. Simply turn your Grizzly tanks around and head in the opposite direction of the objective arrow. You'll discover a separate pathway, winding to the northwest. At the very end, near a crashed Pelican, is the crate, with an Elite and a Jackal squad. 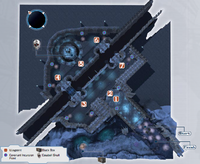 A map of Relic Interior, showing the location of the black box

From the Office of the High Prophet of Regret

Return at fastest possible speed to the world they
know as Harvest. We must learn the secrets inside
the holy relic before the Great Journey can
continue. The humans must not be allowed to enter
the artifact, we will do whatever we must to deny
them access. All must be resolute in this task, or
face punishment.

Scroll to the western most base. Directly north of it is a column supporting a skyway. At the base of this column, on top of a few stairs, is the crate you seek. 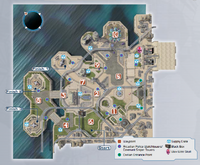 A map of Arcadia City, showing the location of the black box

Captain Alexander, the last civilian captain of Spirit
of Fire, retires from active duty at the conclusion of
the Verent mission. The ship is requisitioned by the
UNSC and scheduled for refit.

In the middle of the map, almost halfway between your original base and the northern Covenant base, there is an abandoned reactor that you can take over for an extra tech level. The crate is on the grass immediately to the west of this platform, near some ferns and an infantry cover spot. 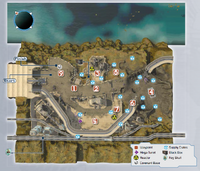 A map of Arcadia Outskirts, showing the location of the black box

Wait until you place the third Rhino across the broken bridge using the "transport" power. Before leaving the area to concentrate on other tasks, check the western shadows for a short separate path. The crate is there.

A map of Dome of light, showing the location of the black box

From the Office of the High Prophet of Regret

Arbiter, you are the Hand of the Covenant - my
hand. You know what must be done. Return to the
surface and capture the human female - the one
who managed to make fools of us on Harvest. She
is the key to unlocking the secrets of the Ancients.

At the very top of the map, and as far east from the Scarab as possible, is a small area surrounded by cliffs. Look for the bountiful gathering of shiny blue supplies and you'll find the crate among them. 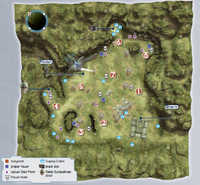 A map of Scarab, showing the location of the black box

After engaging Covenant forces on the surface of
Harvest, the UNSC vessel Spirit of Fire arrives at
Arcadia - only to find that the Covenant are already
there and attacking the colony. Spirit's ground
forces assist the excavation, and help fight the
Covenant to a standstill on the surface of the
planet.

Directly southeast of the base, on a tree-ringed plateau, is the crate. 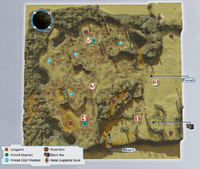 A map of Anders' Signal, showing the location of the black box

The capture of Professor Anders forces Captain
Cutter's hand, Spirit of Fire pursues the enemy into
Covenant space. The ship's AI projects an arrival at
their destination in 312 hours. The ship remains on
high alert for the duration, though nonessential
crewmembers are briefly placed in cryo sleep.

On the western side of the map, near one of the Flood structures you have to put down. Nothing else really distinguishes this location, so check the minimap in the screen below. 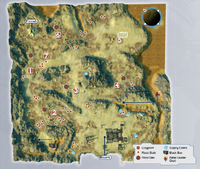 A map of The Flood, showing the location of the black box

Professor Anders writes her father what appears to
be a detailed analysis of Homer's Odyssey. In fact
it is a coded message detailing her mission to
Harvest and the result of the find there. ONI
censors miss the cipher completely and the
message passes unaltered to her father.

Team Bravo is blocking the path to the black box. Rescue them, and any unit can collect it or fly a Hornet over, drop down for the crate. 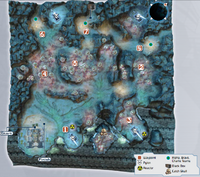 A map of Shield World, showing the location of the black box

Serina, knowing that the crew may be on a one way
trip, manufactures and delivers fake emails from
family members to the crew celebrating Valentine's
Day. She uses previous correspondence as a basis
for the letters. No one ever suspects her of this
deception.

A Hornet is also required to get the mission's black box. It is resting on the northwestern flank of the ship, at the opposite end you found the skull. Note that by "flank," it means the very edges of the Spirit of Fire; beyond the fences, where the ship slopes downward. 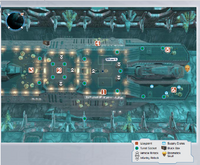 A map of Cleansing, showing the location of the black box

Edict of the Office of the High Prophet of Tolerance

Hear now that five hundred teams are to be formed
to study the language of the Unclean. Each team to
consist of the most clever and most educated
Unggoy and Sangheili. These teams to speak only
the Unclean language among themselves. The
Unclean language to be taught to all military strike
team, that the foe shall be vulnerable.

Like the last crate, this is on the outer edge of the ship (northern flank, southern tip), but tucked closer to the outer fences. Again, you'll need an air unit. 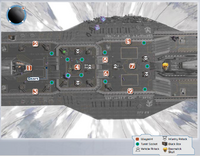 A map of Repairs, showing the location of the black box

The shield world that Regret intended to activate
was one of just a few that the Covenant had
uncovered in the quest for the Halos. These
treasure chests of technology enabled the
Covenant to quickly gain access to advanced
weaponry and space propulsion systems allowing
them to dominate the galaxy.

Head to the north-east edge of the map. Go to the middle of that edge. On a very high and flower-covered cliff is the crate. You can reach this via a ground unit, but as usual, an air unit is a lot easier and quicker. 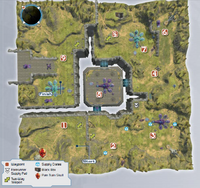 A map of Beachhead, showing the location of the black box

Spirit of Fire arrives at an uncharted planet
swarming with strange alien lifeforms. Within a
day, the ship is drawn into the planet's interior,
where the crew confronts the Covenant and
eventually rescues Professor Anders.

This crate is hidden southwest of the first Covenant base and the possible location of your second UNSC base. It's in a raised grass rectangle, bordered by metal, and you'll need an air unit to get there. 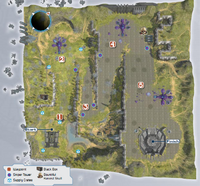 A map of Reactor, showing the location of the black box

Chief Engineer Prescott finishes his assessment of
damage to Spirit of Fire and repairs continue to the
hull, the FTL core reactor cannot be replaced and
plans to manufacture a spare from base reactor
units considered impossible. The decision is
made to run the ship on a skeleton crew and place
the rest in suspended animation.

Compared to the skull, this is very easy. Just take a Warthog from your original base, drive north across the blue ring structure and you'll see the crate in a very obvious location. 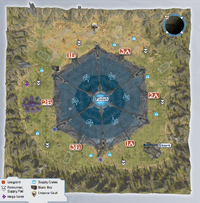 A map of Escape, showing the location of the black box

Thanks to Sergeant Forge's sacrifice, Spirit of Fire
escapes from the Forerunner shield world. Spirit of
Fire sets a course for home as the majority of the
crew prepare to enter cryo sleep for a journey that
will take years, if not decades.