"They should start calling me the Locust of doom!"
— An eager Unggoy Locust pilot during the Second Ark Conflict.[5]

The Barakuza Workshop Siege Crawler is a variant of the Locust line of vehicles operated by the Banished.[1][3] 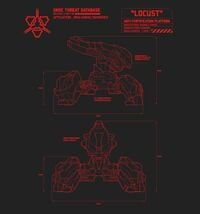 The Locusts used by the Banished bear heavy resemblance to their Covenant-era counterparts, the Shua'ee-pattern Locust. As with most Banished equipment, they are considerably up-armoured and coated in a red and grey paint scheme. Unlike their forebears, the Barukaza Locust design is primarily intended as a combat support vehicle and not as an excavator - as such many of the hardware limitations imposed on Covenant Locust designs by the San'Shyuum have been removed, allowing for a much higher tier of power in its use.[1]

The Banished have modified the standard focus cannon armament on their Locust to be much more unstable, making them more dangerous than their Covenant counterparts.[3]

The Barukaza Locust design, unlike the Shua'ee-pattern before it, employs a pruned colony of Rhulolekgolo to power many of its underlying mechanisms, with a single control console capable of hosting a lone Unggoy pilot to direct the vehicle.[1][2] The use of the Lekgolo control clusters allows the Locust heightened abilities, which harken back to ancient designs.[1]

The Locust design used by the Banished were developed by the Barukaza Workshop, and are now-manufactured by the Armory of Barukaza.[1] The Banished Foundry's garage and its kit assembly line allows the requisition of a Banished Locust at any Banished Outpost.[6]

Unlike their predecessors, the Banished do not employ their Locusts as excavators, but instead as combat vehicles. They serve the Banished as siege engines and assault walkers tasked with supporting the advances of infantry and vehicle forces. This often takes the form of long-ranged support fire, designed to eliminate enemy structures and even targets such as Sentinels.[1]

A few further-modified models of Locust are employed by the Banished.

In April 2559, Banished forces used Locusts against the crew of the UNSC Spirit of Fire during the Second Ark Conflict.[5] During the campaign, Locusts were used by Banished forces to cut through the remains of old Covenant starships for salvaging purposes - and were used to cut through the wreckage of High Charity at the onset of the Outbreak on Installation 00.[7] The design was at some point recorded by the United Nations Space Command and entered into the UNSC Threat Database under record J-458-T-30.[2] The T-30 may indicate that the Barukaza Locust has been type-classified as the Type-30 Locust.

Locusts can be built at the Banished Foundry by all Banished leaders. Locusts perform well against structures, okay against infantry and vehicles, and poorly against aircraft. In Blitz Locusts cost

90. Bloodfuel Locusts siphon health from enemies while Enduring Locusts will spawn Grunt squads when it is destroyed.