From Halopedia, the Halo wiki
(Redirected from Pulse laser)
Jump to: navigation, search 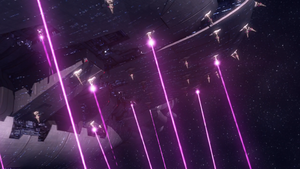 The pulse laser turret is a light Covenant ship-to-ship weapon system. These laser weapons are known to have been mounted on most Covenant ships and starfighters, and are mostly used for point defense but also for ship-to-ship combat.

The pulse laser turret is one of the Covenant's primary weapon systems, often classified as a point-defense weapon and compared to the UNSC's point-defense guns. These pulse weapons are affixed to most Covenant ships, including Kig-Yar privateer ships such as the Minor Transgression, and starfighters such as the Type-31 "Seraph"-class.

The pulse laser turret fires by means of laser, using hydrogen fluoride as fuel.[1] Before the weapon fires, it must first charge; during the charge, a sphere of light energy forms around the charging weapon. After finishing charging, the weapon expels a cyan/purple beam of energy. A section of the ship's shielding system must be dropped to allow the pulse weapons to fire completely.[2]

Like most Covenant weapons, the pulse laser turrets are rated in the kilowatt range.[3] Damages dealt by the pulse laser turrets are known to be serious threats to most, if not all UNSC ships; a pulse laser salvo is capable of melting through 45 cm of Titanium-A armor in a single shot.[4] In one such instance, the UNSC Commonwealth, a frigate, received severe armor damage in sections three and four to a quarter the original width.[4] As such, it is believed that UNSC ships with thicker armor would have to take multiple pulse laser salvos to show the same results.