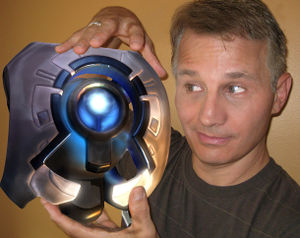 Tim Dadabo and his most well-known Halo character.

Tim Dadabo (born March 1, 1961)[1] is an American voice actor, who uses his talents in video games, commercials, cartoons, narration as well as station promo. He has contributed to Leisure Suit Larry and Red Faction since his career began in 1989, but by far his biggest contribution to the gaming world is as the voice of 343 Guilty Spark.