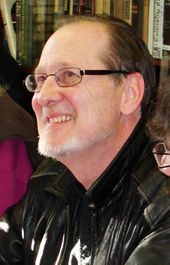 John Shirley (born February 10, 1953) is an American fantasy and science fiction author and the writer of the Halo novel Halo: Broken Circle.[1]

John Shirley was born in Houston, Texas and grew up around Portland, Oregon. Shirley is known for his several cyberpunk science fiction novels, such as the A Song Called Youth trilogy and Black Glass. Shirley also writes novels and stories in the horror and suspense genre. John Shirley has a tendency to write novels and stories with a theme of fantasy that involves political satire or spiritual allegory.

Throughout his career, John Shirley has written short stories, novels, screenplays, and television scripts and has had over thirty of his books published. He also wrote the screenplays for The Crow and for several episodes of Star Trek: Deep Space Nine and Poltergeist: The Legacy. Shirley is a songwriter and a singer and has performed with numerous punk bands. Recently, Shirley has begun to write "tie-in novels" and novelizations of movies and video games. He wrote several novels for the BioShock video game series, as well as for the Borderlands series and Watch_Dogs. On June 23, 2014, 343 Industries announced that John Shirley would be writing Halo: Broken Circle, the first Halo novel published by Gallery Books.[1] The novel was released on November 4, 2014.[2]