Bliss was a human Outer colony world[Note 1] governed by the Unified Earth Government in the Faelith system.[1] Its capital was Manikata.[3] Bliss was orbited by one natural satellite, Aires.[2]

On February 13, 2526, a fleet of 45 Covenant vessels, including five assault carriers, 23 battlecruisers, and 17 destroyers, entered the planet's system.[4] Office of Naval Intelligence operatives on Bliss had apparently learned of the Covenant's inevitable assault and fled the planet. Although the agents of the planet's communications relay took all items of value from the facility with them, they left behind an active communications server, likely assuming the entire station would be destroyed.[5] Three UNSC ships, including the heavy cruisers UNSC Weeping Willows and UNSC Matador, as well as the frigate UNSC Purpose, engaged the Covenant fleet. The battle lasted about three minutes and resulted in the glassing of the colony.[2]

The destruction of Bliss later led to dissident leaders among the Outer Colonies agreeing to peace with the UNSC.[6]

Professor Ellen Anders of Rishard University on Arcadia noted that Bliss, Cote d'Azure, and Onyx had "large-scale engineered features", suggesting the presence of Forerunner structures on the planet.[7] 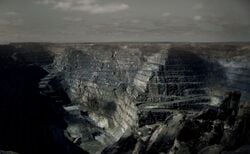 After the Human-Covenant War, a silicate mining settlement was established on Bliss, surrounded by numerous quarries.[5]

By 2558, Bliss had not yet been reterraformed by humanity and was now charted in a sector on the outskirts of human space. In that year, a signal emanated from Bliss. The signal was picked up by a source of reporter Petra Janecek's, whom then instructed journalist Benjamin Giraud to discover the signal's source before it was detected by the Unified Earth Government.[8] Gaining passage aboard a mining freighter, Giraud traveled to Bliss and ventured out into the planet's glasslands. He eventually came across the relatively intact communications relay station that had survived the glassing of Bliss. Inside the facility, he discovered the active communications server that had recorded all ONI records over the years. Taking files from the server, Giraud intended to use them to bring down ONI.[5]

The planet and its system was protected by the Bliss Defense Fleet.[2] Bliss was home to an Office of Naval Intelligence subspace communications relay that allowed for superluminal communications.[5]

Intersystem News reported that an estimated 500 million people were feared dead after the glassing of Bliss. This contradicts the data pads in Halo: Reach, which put all human casualties in the Human-Covenant War by 2530 at 62,154,022.