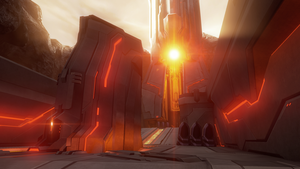 The Forerunner structure designated "The Cauldron".

The Cauldron, designated Site Req//8934-8829,[1] was the UNSC codename for a location on the Forerunner shield world Requiem.

Buried within a large volcanic mountain range, the site dubbed "The Cauldron" appeared to be a thermal processing system created by the Forerunners to power large-scale tension modifiers, which were used to stabilize atmosphere pockets deep within the planet. The Cauldron was the site of numerous conflicts, and eventually led to the discovery of a valuable artifact the Covenant remnants desperately sought. This object and the secrets it held made The Cauldron one of the most significant battleground sites on Requiem, later leading the UNSC to the mysterious Janus Key.[2]

During the Requiem Campaign in 2558, Covenant archaeological teams were operating in this location, and the UNSC Infinity sent Spartan-IV Fireteam Crimson to investigate the area. After dispatching the Covenant forces in the area, Fireteam Crimson was attacked by Promethean forces. The Spartans then found a Forerunner artifact hidden in the facility. The team extracted the artifact and evacuated the area.[3]

Fireteam Crimson later tracked Jul 'Mdama to this location in their continued pursuit of him and gave chase before he narrowly escaped an airstrike coordinated by Commander Sarah Palmer and Robert Dalton and teleported to safety. In his hasty getaway, he dropped a mysterious artifact known as the "Didact's Gift," which was later retrieved by Crimson and transported to Galileo Base for further study.[5]

After touching the artifact, Gabriel Thorne was translocated to "the Cauldron" where he was confronted by seven Sangheili Storm.[6] After a fight, Thorne was overpowered and captured by the Covenant who took him prisoner per Jul's orders who wanted anyone who came through the shrine alive.[7]

Sometime later, UNSC forces set up a forward operations base known as "Magma" in the area. Magma Base came under attack by Covenant forces, forcing them to send a distress signal. Fireteam Crimson was sent in response. The Covenant focused their attack on the base's generators. The Spartans, along with Marines, Mantises and autoturret support, were able to hold off multiple Covenant waves. After successfully holding off the attack, Roland noticed Gabriel Thorne's IFF tag in the area, but when Crimson went to investigate they only found the tag, leaving Roland and Miller to wonder what happened.[8]

The Covenant later launched another counterattack on the base, in which they successfully shot down and captured a UNSC Army D79-TC Pelican, which was then brought back to "Lockup." This Pelican acted as a listening post until Crimson raided "Lockup" and aided the Infinity in destroying it.[9] Later, Jul 'Mdama returned to the Cauldron to activate Requiem's self-destruct, prompting the shield world to eventually collide with its sun.[10]