"Speed is the only protection this vehicle provides; it is unarmored, noisy, and prone to roll-over. It demands a level of skill from its operator that is impossible to expect...during combat conditions."
— Anonymous E2-BAG/1/7 serviceman[3]

A wire frame profile of the M274 Mongoose ULATV.

The Mongoose is one of the fastest and most maneuverable ground vehicles in the arsenal of the UNSC Marine Corps. It is a highly effective vehicle for reconnaissance, rapid transportation, swift tactical versatility, and for shooting between positions. A smaller cousin to the ubiquitous M831 Troop Transport, the Mongoose is a small ATV capable of carrying a driver in the middle of the vehicle, and features a rear platform that can be used to carry one additional passenger, although official UNSC safety protocols advise against this.[5]

The Mongoose is often used for transportation of messages, documents and light cargo between units. It is additionally used by forward observers, sniper teams and reconnaissance personnel for rapid transportation.

AMG Transport Dynamics manufactured the first predecessors to the M274 in 2483 and have since released seventeen variants of the vehicle, the M247 ULATV being the most recent.[5] The vehicle was featured in Machines, Materiel and Munitions from the Human-Covenant Conflict, 2525 - Present, a report compiling armaments of the Human-Covenant War.[3]

Like the M12 Warthog, the Mongoose is a four-wheel all-terrain vehicle capable of going over any obstacle without any difficulty. The vehicle is powered by a 1,000cc liquid-cooled, mid-engine mounted, four-stroke, hydrogen-injected ICE, allowing it to reach at a maximum speed of 95 kilometres per hour (59 mph).The Mongoose has a fuel economy of between 45 and 65 miles-per-gallon (depending on load), though stocking some jerry cans of Nanoreagent hydrocarbot and a carbon feeler can significantly increase the vehicle's range.[3] The Mongoose is not equipped with any sort of radio or GPS system, or even any gauges, leaving users reliant on external means of wireless communication. The Mongoose also contains a front cargo cage, though it is commonplace for UNSC personnel to remove it to allow the vehicle to travel faster and lighter.[3]

At least one variant of the M274, the M274R Mongoose, exists. It was used notably during the Fall of Reach and into the Post-Covenant War conflicts.

The Mongoose's high speed, light mass, and practically non-existent armor make it unwieldy and difficult to control at high speeds and/or over unstable terrain, making the ULATV vulnerable to destabilization, crashes, and flips. Thus, the standard UNSC Marine Corps operating protocol in engagements against Covenant forces is to place an M41 rocket launcher-armed Marine in the passenger position to fire rockets against slow-moving hostile vehicles, while the driver uses the Mongoose's superior speed to evade enemy return fire. To make matters worse, the design of the vehicle and its lack of armor leave both the driver and passenger completely exposed. The Mongoose does not incorporate any offensive or defensive capabilities, making the Mongoose's only practical defenses an armed passenger and its speed. In a last resort situation, the Mongoose can be used to run over nearby enemies. Yet, attempting a splatter is usually an ineffective plan: The low width and height of the vehicle, combined with the aforementioned instabilities when driving, make it very difficult to successfully score an impact on an opponent. 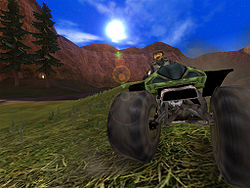 The Mongoose modded into Coagulation in Halo 2.

The Mongoose was originally intended to be put into Halo 2, but was eventually canceled.[6] The Mongoose prototype did not fulfill Bungie's expectations for Halo 2, and although Bungie attempted to add dual coaxial machine-guns to it or an armed passenger, it remained unbalanced and didn't fit into the gameplay. Bungie at the time could not figure out a way to implement it into the campaign, and had trouble getting the physics for it right, stating that the whole thing had a tendency to flip very easily, and gameplay wise, had no purpose as it couldn't be driven with the flag and became virtually useless. The addition of the passenger seat gave rise to whole new possibilities and led to its inclusion in the third game. Other Warthog-related vehicles proposed in Halo 2 were also not featured in the final game.

During the production of Halo 3: ODST, an NMPD variant of the M274 "Mongoose" ULATV was originally going to be put in the game[citation needed], but was cut before the game's final release.