From Halopedia, the Halo wiki
(Redirected from M274-M Gungoose)
Jump to: navigation, search 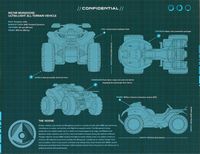 The M274R Mongoose is a variant of the M274 Mongoose quad bike. The Mongoose served in a variety of roles with the UNSC's ground forces, including as a courier, tow vehicle, and flight line support handler. The Mongoose#s heavy suspension can safely handle up to a metric ton of passengers and cargo, and MJOLNIR-clad Spartans made extensive use of it in the defense of Reach. Though rated for use by UNSC tactical and light armored vehicle units, it is neither armed nor armored. Non-Spartan personnel consider the Mongoose a deathtrap in combat, though there were situations when it was used in anti-tank and raiding roles; most notably with SPNKr-armed passengers providing heavy firepower while expertly trained drivers focused on not rolling over or being struck by Covenant plasma.[1]

Like the M12 Warthog, the Mongoose is a four-wheel all-terrain vehicle capable of going over any obstacle without any difficulty. The vehicle is powered by a 1,000cc liquid-cooled, mid-engine mounted, four-stroke, hydrogen-injected ICE, allowing it to reach at a maximum speed of 95 kilometres per hour (59 mph).[3][1] 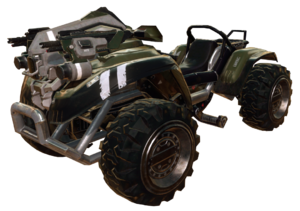 The M274-M Gungoose is an armed variant of the Mongoose. Colloquially known as the "Gungoose", the M variant is armed with a pair of optional M67 light anti-infantry weapons.[3][4]

Changes from the M274 Mongoose in Halo 3 and Halo 3: ODST to Halo Reach[edit]