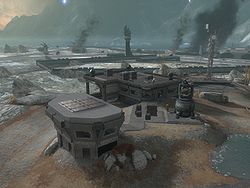 Airview Base, occupied by the Covenant during the Fall of Reach.

Airview Base was a small UNSC watchpoint outpost near Sword Base on the Babd Catha Ice Shelf on Reach, named so because it overlooks the base's airfield. It contained one anti-aircraft turret before the Battle of Reach began.[1]

On July 26, 2552, Kat-B320 and SPARTAN-B312 were ordered to reactivate the AA turret to clear the skies for UNSC dropships during an attack on SWORD Base.[2] The base was later overrun by Covenant forces, who would later place two Tyrant AA guns at its location. On August 29, Noble Six and a squad of ODSTs passed through what remained of the base in an M808B Scorpion tank, destroying the two Tyrants on the way to Sword Base, clearing the sky for Noble Team's Falcon tiltrotors.[3]

At some point, a UNSC operation would retake the base and use the Covenant Tyrant guns as defensive points.[1]