From Halopedia, the Halo wiki
(Redirected from Battle of Algolis)
Jump to: navigation, search

The Algolis Invasion was an engagement that took place in the Algol system during the Human-Covenant War. It occurred no earlier than 2548.[note 1]

Between 2548 and 2552 the human colony on Algolis was attacked by the Covenant. The aliens' main objective was the destruction of Weapons Research Facility T12A, where the UNSC was developing highly advanced weaponry. While the civilians were evacuated by Marines, a team of combat engineers was sent to Facility T12A to enact the Cole Protocol, destroying navigation data and a prototypical combat exoskeleton. The Covenant attacked the Marines in full force, breaking their defensive line and pinning down the survivors. In the ensuing chaos they destroyed several of the spacecraft ferrying civilian colonists off the planet, killing hundreds in the process. However, one Marine engineer, a sergeant nicknamed "Ghost", went against orders and equipped the armor slated for destruction, hoping to redeem himself as a promise to a deceased comrade.

Ghost managed to destroy swathes of Covenant forces, allowing the Marines and civilians to escape. Using the suit's powerful armament, he savagely countered the Covenant assault and laid waste to most of their ground vehicles and aircraft. When the suit was damaged and Ghosts was cornered he gave a code-word activation: this activated a nuclear self-destruct in the armor, killing himself and all Covenant forces in the area. The weapons facility was consumed by the blast, depriving the Covenant of any classified data they had sought to obtain. Marines fell back to a frigate in orbit over the planet along with the surviving civilians; meanwhile the frigate would deploy an ONI contact team to verify all classified data and matériel had been purged.[1] The frigate would then move to rendezvous with the destroyer UNSC The Heart of Midlothian.[2] 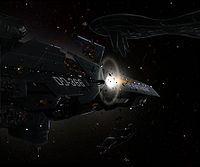 UNSC The Heart of Midlothian under siege

Covenant Special Operations forces boarded The Heart of Midlothian as soon as the destroyer dropped out of slipspace and killed the crew in their entirety save one Orbital Drop Shock Trooper, Michael Baird. They quickly disconnected the shipboard AI, Mo Ye. Baird was in the surgery unit during the boarding action, inadvertently saving his life. Mo Ye informed the ODST that she was unable to self-destruct the ship per the Cole Protocol due to a restriction placed on her in her disconnected state which did not allow her to willingly harm a human.

Mo Ye guided Baird to the bridge of Midlothian. Baird tricked an Elite into killing him. Baird's sacrifice allowed Mo Ye to destroy the ship. The Heart of Midlothian and the Covenant battlegroup surrounding it were destroyed.[3]

Little is known of the outcome of the battle. While the Covenant were defeated, the humans suffered substantial losses and were presumably forced to abandon Algolis altogether. However, the Covenant never acquired the technical data behind the combat exoskeleton used in the battle and, even more importantly, the Covenant failed to acquire Earth's location from the databanks on the Midlothian.