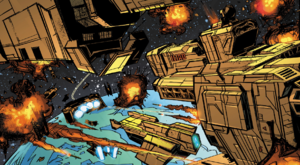 Human starships were space faring vessels built by Humans. Humans have maintained and created numerous starships throughout their existence and numerous factions have controlled them.

A number of factions operate Human starships, including the Unified Earth Government and its branches the UNSC and the CAA. The Insurrectionist factions, the United Rebel Front and the New Colonial Alliance as well operated their own ships. Independent human governments such as the Gao Republic. The Covenant remnant faction the Keepers of the One Freedom also made use of some human starships.

Human ships have unique names. As well, to assist in faction identification, they are often adorned with the prefix of their faction.

Humans have had armed ships since the ancient days. An ancient example is the Fibril cutter. Post-Great Purification weapons include Archer Missiles, M910 Point-defense guns, Shiva-class nuclear missiles and on larger ships, the Magnetic Accelerator Cannon.

Multiple starfighters were created by humans. These include the GA-TL1 Longsword-class Interceptor, the F-41 Exoatmospheric Multirole Strike Fighter, the Open Frame 92/Extra-Vehicular Activity, and the YSS-1000 Prototype Anti-Ship Spaceplane.

A number of dropships were created by humanity. These include the Pelican line of ships, the Condor line, the D82-EST Darter, and the D96-TCE Albatross.

Humanity was once a highly advanced spacefaring civilization, spanning a number of star systems. They operated a number of ships, including the Prime cruiser. Following the Human-Forerunner war, humanity was fragmented and de-evolved into a variety of subspecies and losing all space travel knowledge in the process. 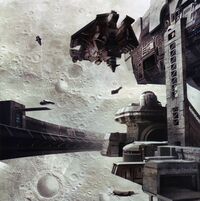 Colony ships in orbit of Luna.

Due to the Great Purification, humanity had to rebuild it's space based efforts. It wouldn't be until 2291 before humanity relearned the secrets of Slipstream Space, thanks to the efforts of Tobias Shaw and Wallace Fujikawa[1] In 2362, the first extra-solar colony ship was created, named the Odyssey. This sparked a wave of colonization.[2] Along with the Odyssey, the first known ship of the prolific Phoenix-class colony ship was built.[3] These colonization ships were built or otherwise serviced above Luna.[4]

By 2490, humans had established 800 colonies, divided by the prospering Inner colonies and the under developed Outer Colonies.[2] Political tension existed because of this division. One of the starting factors of the resulting insurrection was the Callisto Incident which saw the capture of the UNSC Callisto.[5] Space warfare between the UNSC and insurrectionist factions took place.

The UNSC developed a number of ship classes during this period including the Valiant-class super-heavy cruiser,[6] the Orion-class assault carrier,[7] and the Halcyon-class light cruiser.[8]

The wreckage of UNSC ships over Camber.

At the start of the war, the UNSC stripped the Colonial Military Administration of most of it's naval resources and gave them to NAVCOM.[9]

Over the course of the Human-Covenant war, the UNSC saw huge losses in terms of starships lost. Though with the war, new developments came. Construction on the UNSC Infinity, post-Halo's largest starship, in 2544.[10]

The Infinity with its Autumn-class heavy cruiser escorts.

After the war, an unprecedented addition human ships was created, the energy shield. The Autumn-class heavy cruiser, the Strident-class heavy frigate and the Infinity-class supercarrier were all added to the UNSC's fleet; all three had built in shielding.[11][12]

As well, the various ship battles over the course of the war created debris fields over human colonies. One instance of this was over Tribute.[13] Civilians could also scavenge some of these ruined ships and even claim them using loopholes in the maritime salvage law.[14]

The UNSC has operated most of humanity's post-Great Purification fleets, including their most powerful warships. These include the powerful cruisers, carriers and a battleship class. Smaller vessels include corvettes, frigates, and destroyers.

Insurrectionists as well managed to capture or otherwise procure warships. The Iliad, a United Rebel Front frigate, was known to harass and attack UNSC ships around Eridanus II in 2517.[15] The URF also operated a destroyer, the URF Origami.[16]

Yachts are personal luxury craft in use by civilians primarily.