(Redirected from Base Turret)

The light model (left), medium model (middle), and heavy model (right) of the 2531 UNSC base turret.

The base turret is a stationary weapons platform used by the United Nations Space Command, particularly deployed in UNSC Firebases. One of several automated turrets in UNSC service, the emplacement's standard armament is the M202 XP machine gun.[1] 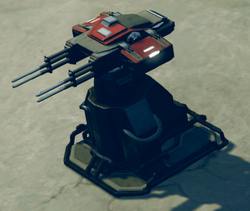 Automated weapon towers are installed around UNSC firebases to deter attack. Most firebase facilities have power and control hookups prearranged for up to four Turrets. The base towers used by the UNSC Spirit of Fire are relics of a defensive-in-depth tactical doctrine the UNSC was eventually forced to abandon as the Covenant War ground down Humanity's armies and industrial centers.[2]

This version of the base turret was in use by at least 2531. It was used by the forces of the UNSC Spirit of Fire in the battles of Harvest, Arcadia and Trove, wherein it was deployed in the "pod" Firebases deployed by D20 Herons.[3] These turrets were assembled in the underground section of the firebase before being deployed into one of the four available slots. Ammunition is stored under the turret, providing a steady supply for the weapon mounted on its 360-degree traversal mount. When a 2531-model base turret sustains too much damage, the structure explodes, but the turret slot remains intact, allowing the base to assemble and deploy another base turret.[1] These turrets were also employed by unidentified Insurrectionist forces on Arcadia and Harvest. These turrets operated similarly to the light UNSC model, but possess maroon-colored plates over the UNSC green and have much weaker armor.[3]

Base turrets are also equipped on starships. The UNSC Spirit of Fire features at least 15 base turrets on its hull, though their use is limited to repelling boarders rather than naval engagement.[4] At least one of a weaker variant was mounted within the Pilgrims' Pride, and was destroyed by Spartan-IV Anthony Madsen during the skirmish onboard.[5]

Three versions of this base turret are fielded, each of which has progressively heavier armor and armament. The light model features only one M202, whereas the medium variant mounts two M202s, and the heavy variant has four M41 Vulcans.[1]

In addition to the turret's machine guns, a base turret could be equipped with additional armament. Their use is mutually exclusive, however, as there is insufficient space to mount more than one system on any given turret.[3]

The turrets deployed by the Spirit of Fire on Installation 00 demonstrate a few minor aesthetic differences to their 2531 counterparts. These turrets can be deployed independently of Firebase deployments via Pelican airlift.[6] Leaders such as Morgan Kinsano can use this ability to deploy a turret anywhere on the battlefield. Jerome-092 also has the ability to call in a specialised variant known as the Victory Turret. When deployed, it inspires friendly units. Tier I of the ability can deploy one turret, while Tier II can deploy two. 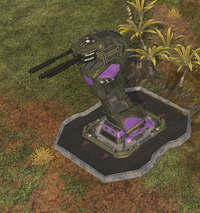 A Base turret owned by the Covenant.

In Halo Wars, the base turret is the main defensive building, serving as the human equivalent of the Kewu Umppi'pa'-pattern citadel turret. Base turrets become available for construction at the UNSC firebase's turret sockets after purchasing the Station upgrade. The campaign levels Cleansing and Repairs, both of which take place on the hull of the UNSC Spirit of Fire, feature a number of individual turrets sockets (15 and 11, respectively) on the hull to repel enemies. On the Skirmish map Beasley's Plateau, both UNSC and Covenant players have access to four individual turret sockets, each defending two building sites. On Skirmish, each rebel base features two to four base turrets, but they are considerably weaker than their UNSC counterparts.

For the specialised upgrades, the player may only use one upgrade at a time. Extra weapons do not affect the machine guns' operation. For example, a turret armed with an anti-air upgrade will still fire at infantry and vehicles. As well as weapon upgrades, base turrets can be further upgraded to medium turrets, and then large turrets at the UNSC Field Armory. The upgrade to a medium turret adds a third of the armor and another M202 XP machine gun. The upgrade to a large turret adds an additional 50% armor and two more machine guns.[7]

On some maps with neutral turret building sites such as Beasley's Plateau, the Covenant are able to build Base turrets as the sites do not support the construction of Kewu Umppi'pa'-pattern citadel turrets. In this case, the Covenant-constructed turret will have Covenant highlights such as purple.

Base turrets are one of the three buildings available on a turret slot, the others being the Watchtower and the Siege turret. Like their Halo Wars counterparts the turrets in Halo Wars 2 can be upgraded to anti-infanty, anti-vehicle, or anti-aircraft. Each of these upgrades cost 300 power and can only be built once the firebase has been upgraded into a Combat Station. The turret can be upgraded with energy shielding if the player applies a Leader Point into R&D Leader Powers and also can be upgraded with Fortify Base Upgrade to increase their health and attack power. The turrets can only be upgraded through the UNSC Armory.