"FOB Charlie is now a Banished-free zone. Hit that terminal and we'll make it official."
— The Weapon to John-117 after the Spartan eliminated the Banished troops at FOB Charlie. 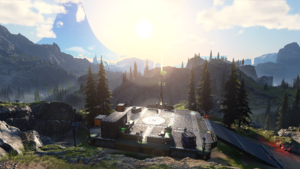 FOB Charlie is a UNSC Forward Operating Base (FOB) on the fragment sections of Installation 07 during the Battle for Zeta Halo.[1]

Following the Banished's ambush on the UNSC Infinity upon its arrival at Installation 07 on December 12, 2559, UNSC forces made landfall on the ring.[2] While many survivors at the fragmented section of the ring gathered at the wreckage of the Mulsanne-class light frigate UNSC Mortal Reverie as a base of operations,[3] they also established Forward Operating Bases in nearby locations.[4] Overlooking the structures above the main chamber of the Conservatory, FOB Charlie was located south of the Banished excavation site designated Site Novem, with the Banished outpost Redoubt of Sundering located to its west.[1]

By March 3, 2560, FOB Charlie was in Banished control,[4] with the Banished adding their own equipment and troops around the FOB.[1] The FOB was also connected to the Banished battle network protocol,[5] tracking nearby UNSC and Banished activity.[6] At some point after Master Chief Petty Officer John-117 was retrieved by Fernando Esparza onboard Echo 216 on May 28,[7] the Spartan eliminated the Banished forces at the FOB and deployed his artificial intelligence known as the Weapon at the FOB's terminal.[1] The Weapon removed the FOB from the Banished network, returning it to UNSC control,[6] and marked the nearby locations of interest on John-117's TACMAP.[1]

"FOB captured. One more foothold for the UNSC. According to Banished records, we're right in the middle of some of their most active transport routes on the whole Ring. These days they mostly support Escharum's excavation efforts, but for most of the war... it was prisoner transport. Escharum's not gonna be happy about losing it."
— The Weapon to John-117 after capturing the FOB.

FOB Charlie becomes available in the "Connections" section of the Halo Infinite campaign.