"No more hostiles. FOB Echo's ready to be brought back into the fold."
— The Weapon to John-117 after the Spartan eliminated the Banished troops at the FOB.

FOB Echo is a UNSC Forward Operating Base (FOB) on the fragment sections of Installation 07 during the Battle for Zeta Halo.[1] 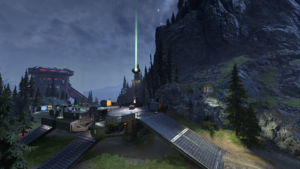 Following the Banished's ambush on the UNSC Infinity upon its arrival at Installation 07 on December 12, 2559, UNSC forces made landfall on the ring.[2] While many survivors at the fragmented section of the ring gathered at the wreckage of the Mulsanne-class light frigate UNSC Mortal Reverie as a base of operations,[3] they also established Forward Operating Bases in nearby locations.[4] FOB Echo was located north of Chak 'Lok's Tower, with the Banished outpost Redoubt of Sundering located to its southeast.[1]

By March 3, 2560, FOB Echo was in Banished control,[4] with the Banished adding their own equipment and troops around the FOB.[1] The FOB was also connected to the Banished battle network protocol,[5] tracking nearby UNSC and Banished activity.[6] At some point after Master Chief Petty Officer John-117 was retrieved by Fernando Esparza onboard Echo 216 on May 28,[7] the Spartan eliminated the Banished forces at the FOB and deployed his artificial intelligence known as the Weapon at the FOB's terminal.[1] The Weapon removed the FOB from the Banished network, returning it to UNSC control,[6] and marked the nearby locations of interest on John-117's TACMAP.[1]

"That'll do it! FOB captured. Looks like we're right on the edge of the island — a chunk of what used to be a single, contiguous structure. Can you imagine the force it would take to blow this Ring apart? Must've been quite a show."
— The Weapon to John-117 after capturing the FOB.

FOB Echo becomes available in the "Connections" section of the Halo Infinite campaign.