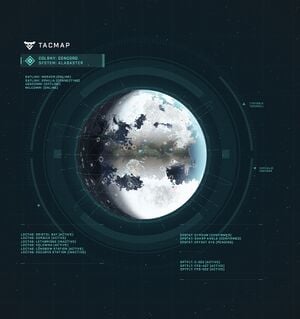 A planet wide TACMAP of Concord, used by the UNSC Army during the Defense of Concord.[1]

A tactical map (TACMAP) are virtualized maps utilized by personnel of the UNSC Armed Forces.[2]

TACMAPs display information on terrain and geography, provided by satellite imagery and topographic surveys. Accessible through data pads or heads-up displays, these maps can be interfaced with navigation markers to identify targets, and relevant data can be shared through the UNSC battle network.[2] A unit's TACMAP is maintained by an intelligence squad, responsible for gathering new data with reconnaissance drones and establishing TACMAP linkups to HUDs.[3]

TACMAP can be used to identify allies and squadmates,[4] with teammates transmitting their locating to their unit through TACMAP.[5] Hostiles appear through TACMAP in the form of red ovals.[4] Mission objectives are also stored with TACMAP.[6] TACMAPs are primarily used by Spartans, integrated into the HUD interface of the MJOLNIR Powered Assault Armor or Semi-Powered Infiltration Armor.[3][4] A similar navigation feature can also be used by the Orbital Drop Shock Troopers, as a component of the VISR system in their armor.[7]

The scale of the TACMAP can be anywhere from a district of a city[7] to a whole planet.[1]

The TACMAP used on the MJOLNIR [GEN3] armor.

In campaign and Firefight, the TACMAP is available on the "NAV" tab in the VISR database. Players can use the TACMAP to locate objectives and beacons in each level. The TACMAP provides real-time location of enemies (shown as red dots) and other players (shown as green dots) on the map. In campaign, players can place a waypoint on the TACMAP, and its location would also appear on the HUD's compass during gameplay.