"Whoever controls Halo controls the fate of the universe."
— Captain Jacob Keyes

Installation 04, also known as Alpha Halo, or simply Halo,[4] was one of seven ring-shaped superweapons that comprised the Forerunners' Halo Array. It was located in the Soell system in the Orion Arm and was the closest Halo ring to the human sphere.[2] 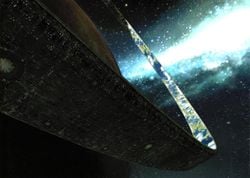 The purpose of Installation 04, along with its brethren, was to preclude and thwart the parasite forms known as the Flood from consuming all sentient life in the galaxy by destroying all sentient life to prevent eventual consumption. In the event of a Flood outbreak, one of the seven installations could be triggered (in turn triggering the remaining Halos) to annihilate all sentient life within a radius of 25,000 light years. In the event of an unexpected shutdown, all remaining rings would go into a "standby state", in which they could be fired at once from the Ark if need be.

Installation 04, until its destruction by John-117, was controlled by the Forerunner artificial intelligence construct (Monitor), 343 Guilty Spark.

The climate of Installation 04 was very similar to Earth's climate. There have been hurricanes over the oceans on the ring.[5] The weather was, however, extremely unpredictable - rain and snowfall could occur at random, leading Cortana to wonder if the weather was intentionally irregular, or if it followed a pattern such as snow being deliberately made at the control room to slow the Flood.[6][7] The ring boasted a diverse ecosystem, which included colonies of Thanolekgolo.[8]

Installation 04 orbited the massive gas giant Threshold, and was suspended in the Lagrange point between Threshold and its largest natural satellite, Basis. The installation had a 24-degree axial tilt from Threshold's orbital plane. Due to this, any given point on the surface of the ring received sunlight from the star Soell for half of the time it was on the sunny side of Threshold, and none when was on the dark side. This created a somewhat unusual day-night cycle for the ring, in which it was dark three-fourths of the time and had no sunrise or sunset similar to those of a planet.[9]

When the IsoDidact activated the Array at the Forerunner-Flood war's conclusion, ending the centuries-long conflict, Installation 04 was the first to fire,[13] followed shortly after by the other six Halo rings. Installation 04 lay dormant for a hundred thousand years, with 343 Guilty Spark and his Sentinels ready to keep the Flood confined in the Flood containment facilities and keeping the infrastructure of the Halo in perfect working order.

After eons of uneventful existence on Installation 04, 343 Guilty Spark eventually found himself bored. For his own amusement, Spark began an experiment in which he evacuated entire sections of the Installation into space; according to Spark, these were experiments to measure the geologic effects of exposure to the vacuum of space and the eventual biological recovery of the evacuated sections, in order to gain insight into emergency response scenarios.[14]

Around 40,000 BCE, an unidentified alien vessel crash landed in Sector 1215. Sometime prior to the crash the ship started broadcasting a distress signal.[15][16] After attempting to translate it, 343 Guilty Spark blocked the signal, as no communication revealing the location of any of the Halos was allowed.[15] After no lifeforms exited for several days, Spark had a large sarcophagus constructed around the vessel.[16]

Between the activation of the Array and the arrival of the UNSC and the Covenant, a number of space-faring species stumbled across the installation. Although they reportedly explored the facility and recorded their findings, all of these species eventually left without breaking containment.[17]

"Halo... It's finished."
"No, I think we're just getting started."
— Cortana and John-117 after the destruction of Installation 04.

The UNSC Pillar of Autumn arrives at Installation 04.

The Pillar of Autumn arrived around September 19, 2552 and was promptly shot down by the warding Covenant ships. Shortly thereafter, the Covenant ground forces on Installation 04 accidentally unleashed the Flood from captivity. Humans, Flood, and the Covenant fought massive battles against one another as the Forerunner constructs tried to control the outbreak by activating Halo. The ring's monitor, 343 Guilty Spark, tried to convince the Master Chief to activate Halo. Not knowing the truth of what it did, he attempted to light the ring but was stopped by his AI friend and companion Cortana who was in the Core. She informed the Master Chief of Halo's true purpose and stashed the Activation Index in her memory banks. The Monitor betrayed the two and tried to kill the Master Chief and retrieve Cortana, but the two escaped and started plotting against him.

The destruction of Halo.

In the conclusion of the battle, John-117 detonated the Pillar of Autumn's fusion reactors in order to destroy the ring. The explosion critically damaged the superstructure below it; the resulting shockwave and damage to the ring's systems destabilized the ring, shattering it into pieces.[18][Note 1]

Only a handful of humans and Covenant survived the battle. 343 Guilty Spark floated through space to a gas mining platform over Threshold, where he stumbled upon a Covenant expeditionary force. Inspired by his words, they began a heretical rebellion against the greater Covenant. Installation 04's destruction is seen as the first step in the chain of events that led to the Great Schism. The Heretics were quelled by Arbiter Thel 'Vadam who silenced their leader, but the seeds of a rebellion were planted. The Monitor was then captured by the loyal Covenant and later defected to the humans' side until he was destroyed on the replacement Alpha Halo by SPARTAN-117 with the help of Sergeant Johnson.

Installation 04 was the first Halo installation encountered by humanity, as well as first to be destroyed. Its attempted firing triggered the activation of a portal leading to Shield World 006 within Onyx,[19] and also caused the Ark to start constructing a replacement ring.

The burning wreckage of Installation 04, surrounded by vessels of the Covenant armada in the aftermath of the battle.

Installation 04's destruction left behind a large field of debris, with a few large chunks of the ring remaining.[20] Some smaller pieces of Installation 04 have landed on Basis, while others have burned up in Threshold's atmosphere upon entry.[21] One damaged fragment notably made a slipspace jump as a safety measure, and ended up in a distant system.[22]

A segment of the broken ring.

Following the return of the survivors from the battle, the Office of Naval Intelligence learned of the Flood lifeform. Section III sought to establish a research laboratory in order to control the Flood parasite and possibly weaponize it against the Covenant. A science team headed by Major John Smith was authorized to take command of the prison vessel Mona Lisa. After bringing a group of Covenant prisoners aboard, they jumped to the wreckage of Alpha Halo in the Soell system. Some Flood specimens had survived the ringworld's destruction and were recovered to be experimented on both human and Covenant prisoners. However, the Flood soon broke quarantine and infected the ship. ONI later dispatched a prowler, the UNSC Red Horse, to assess the status of the Mona Lisa under the pretenses of investigating Halo's debris field. On October 25, 2552, the prowler was forced to destroy the overrun vessel with a Shiva-class nuclear missile.[23]

Shortly after the destruction of the Halo, Installation 00 began to automatically construct a new Halo to replace Installation 04. This exact copy of the first Halo ring was nearing completion only a few months after the first ring was destroyed, but was also subsequently destroyed when it was fired before it was ready by John-117 and Cortana. 343 Guilty Spark attempted to prevent this, but was finally destroyed by the Master Chief with the help of Sergeant Johnson in the new ring's Control Room.[24]

The UNSC's peace treaty with the Swords of Sanghelios forbids either party from landing on the remains of Installation 04.[25] There is a 500-light-second exclusion zone surrounding the former site of the ring. In 2556, Spartan-IV Fireteam Apollo was deployed to the exclusion zone in direct violation of the treaty; there they recovered some items of value, including a "black box" from the Covenant cruiser Undiminished Entelechy.[26]

At some point after the war, a Spartan-IV reconnaissance team was deployed to Basis. Wearing VECTOR-class Mjolnir armor, a variant designed for artifact retrieval, their mission was to assess the debris of Alpha Halo scattered on the moon's surface.[27]

When the Pillar of Autumn's reactors went critical, Installation 04 attempted to activate a safety measure and make a slipspace jump. However, this self-preservation protocol was only partly successful, and only a small portion of the ring managed to enter slipspace before the Autumn's reactors overloaded and destroyed the ring. The surviving fragment of the Halo reentered normal space in the vicinity of a red giant star some distance away from the Orrichon system and was caught in the giant star's orbit.[22] This fragment was home to a unique element apparently created by the heat of the ring's explosion and not found elsewhere in the universe. The element was later refined and used in a bioweapon unleashed in a terrorist attack on Sedra City.[25] A joint classified mission was launched to Alpha Shard by an ONI team and members of the Sedran Colonial Guard. Though most of the team was killed during the mission, Colonel Randall Aiken sacrificed himself to destroy the deposits with a HAVOK tactical nuclear weapon.[28]

During the UNSC Spirit of Fire's battle with the Banished at the Ark in March 2559, Captain James Cutter, Professor Ellen Anders, and logistics AI Isabel formed a plan to deploy the second replacement for Alpha Halo, Installation 09, to the Soell system in an attempt to send a distress signal to human space.[29] On the way to the original site of Installation 04 however, a Forerunner Guardian construct controlled by Cortana's Created intercepted the ring.[30]

Detail of the outer surface of the ring in Anniversary.

While the design of the Halos has stayed largely consistent across all post-Halo: Combat Evolved media, Installation 04 underwent a significant visual overhaul in Halo: Combat Evolved Anniversary. The entire superstructure of the ring has been redesigned. To wit, the surface features are completely different and much more pronounced, including additions such as rows of prominent prongs lining the ring's edges and large-scale patterns of bluish light. This redesign has not been carried over to post-Anniversary media: the prongs are absent from Installation 03 in Halo 4, and a visual allusion to the Halos in Halo 4: Forward Unto Dawn follows the original design. However, the "prong" design does make a subtle appearance on the outer shells of the arcade machines for Halo: Fireteam Raven.