Participants in the Fall of Reach

(Redirected from Fall of Reach/Participants) 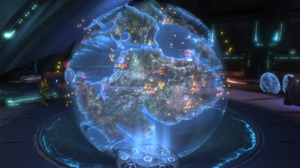 A holotank hologram of Covenant forces deployed around Reach.

The participants in the Fall of Reach were numerous. Both the Covenant and the UNSC deployed large numbers of naval and groundside forces, as well as dozens of different types of vehicles and equipment. 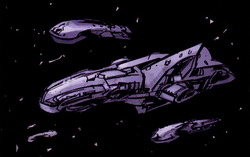 Various Covenant fleet elements at the Fall of Reach.

Ground side, the Covenant deployed a number of vehicles including the Karo'etba-pattern Ghost, the Zurdo-pattern Wraith, the Rizvum-pattern Revenant,[11] and the Deutoros-pattern Scarab.[19]

The Covenant made use of large Cheru-pattern Tyrant AA guns during the battle.[1]

The Covenant made use of the Almar-pattern repository.[1] As part of their cover system, they also used the Pavise of the Worthy[11] and Guardian Triptychs.[20] For communications, Spike of Obeisances were placed down.[1]

A number of named soldiers are also seen as having participated in the battle through the randomed Fireteam mechanic in Halo: Reach.