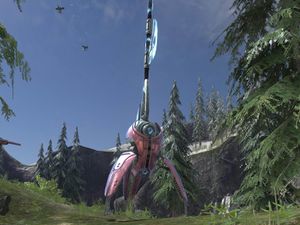 A communication node used during the Battle of Installation 00.

Spikes of Obesience, also known as Covenant comm relays[1] or comm nodes,[2] are mobile communication devices used by the Covenant on the battlefield. The first link in the Covenant's control began with the placement of these Spikes in areas they intended to dominate.[1]

The Spikes of Obesience were used by the hegemony as a means to connect to their battle network and functioned as a combination of proselytism, network up-links, communication hubs, and sensor relay nodes.[1] The comm nodes come in several different variants, with the most common variant depicted as tall devices, consisting of a stalk protruding from a central structure, supported by a trio of "legs". They are primarily magenta, black, and silver in color.[3] Some comm nodes keep the tall antenna, but with a single large base structure[4], while others bear more resemblance to the Covenant supply case, with antenna and a keyboard attached.[5]