Throughout the Halo series, Bungie have inserted numerous references to their older Marathon series. This is in keeping with their long history of incorporating references and allusions to their previous games in new works. At one point they even revealed that the stories of Marathon and of Pathways into Darkness (their first story-based action game) were connected. Many of the aforementioned Marathon references in Halo are appearances of the Marathon symbol, which in the Halo universe is the Forerunner symbol for "Reclaimer".

The Pillar of Autumn with the Marathon symbol seen in the gray circle. 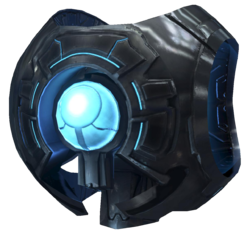 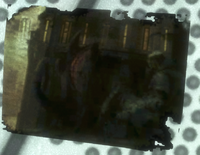 A Marathon symbol is seen on a rock when the whole waterfall is visible, as well as inside the waterfall at the base.

The symbol found on the Wraith's gunner seat.

The symbol in gold, on the right-most Spartan. (Click to enlarge)

Bungie avoided the use of the Marathon symbol in Halo: Reach, presumably due to property rights issues with Microsoft. The symbol has been removed from the emblem gallery, the difficulty icon shields, the hull of the Pillar of Autumn and replaced with the Seventh Column on Captain Keyes' ID patch. The symbol in the eye of the Forge Monitor has also been changed.

In the short story "Human Weakness" written by Karen Traviss, we see a new perspective on Cortana's interrogation and imprisonment by the Gravemind. This story makes the reference to the three stages of rampancy in the dialogue from Halo 3 much more explicit and seemingly canonizes the concept of three progressive stages to rampancy within the Halo universe for the very first time.[3]

Some Sangheili believe that "Demons" are actually corpses reanimated through artificial means to continue fighting as supersoldiers. This is reminiscent of the battleroids from the Marathon trilogy, who are built from the bodies of dead soldiers to serve as physically and technologically augmented supersoldiers. The player character is possibly a Mjolnir Mark IV battleroid.