The Halo 3 Announcement Trailer was debuted at E3 2006. Unlike the Halo: Combat Evolved and Halo 2 trailers, the Halo 3 trailer is in widescreen and HD (high-definition). Cortana's final line within the trailer seems to reference the first of the Cortana Letters.

Fade in from white to ruins at the edge of New Mombasa. A comical warning sign depicting a Grunt crossing swings in the wind. The camera slowly pulls back as a gust of wind kicks up a cloud of sand. A flash of blue light flows toward and past the camera, a partial image of Cortana visible.

Cortana vanishes, and the camera continues to back through ruins. A cloud of smoke rises, along with the storm, distorting the familiar silhouette approaching the camera. Again, a transmission from Cortana flashes by, showing her lips moving realistically.

The figure, which is clearly the Master Chief, walks through the smoke, an assault rifle over his shoulder. He stares off to the right. He readies the gun and looks straight ahead. A transmission flashes by showing Cortana's entire face.

Her face fades away into the Chief. Three Banshees fly toward the camera from behind him. We follow them to see a Covenant Assault Carrier in the foreground with a fairly sizable Covenant fleet in the background. Nine Banshees (whose pilots' identities are hidden from us) are escorting a Phantom. The Chief stands at the edge of a cliff. We follow the Covenant ships to see a massive Forerunner structure in the valley. A hole is in the center, directly beneath the eye of the storm within the raging clouds above. A shockwave sweeps the valley as plates in the structure rise. As soon as the shock wave occurs, the Assault Carriers start moving out of the huge crater. The cliffs start to break away, and the Chief watches his footing. Energy gathers in the center; we see the reflection in the Chief's visor. It fires; fade to white; cut to black.

Cortana: (voice over) "This is the way the world ends."

The Halo 3 logo is shown, and the trailer ends with: 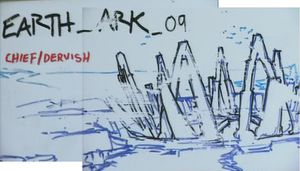