The Halo Theme plays. Fades in to a canyon where John-117 and his marines were looking for survivors on Installation 04 in Halo: Combat Evolved graphics.

Cuts to the snowy canyon near Installation 04's Control Room, where marines from Fireteam Zulu can be seen engaging Covenant troops and vehicles.

Cuts to the camera zooming in towards John-117 in front of another Forerunner light bridge inside a Flood containment facility.

A white light flashes, and in the same place, everything changed into Halo: Combat Evolved Anniversary graphics. 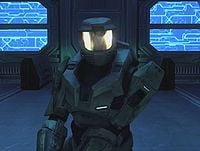 John-117 as he appears in the trailer.

The Halo Theme chorus ends, and the quick percussion music begins. The camera zooms out, showcasing the completely new graphics in the containment facility.

Cuts to the campaign level "343 Guilty Spark", the swamp with upgraded graphics.

Cuts to the Library from another campaign level, also in upgraded graphics.

Cuts back to "The Silent Cartographer", an M12 Light Reconnaissance Vehicle races around the beach of the island. Cuts to the marines engages the Covenant during their beach assault.

Cuts to a Major Elite patrolling the second floor of the shuttle bay of the Ket-pattern battlecruiser Truth and Reconciliation. Cuts to the player, as John-117, fires a Okarda'phaa-pattern plasma rifle at a Minor Elite on the lowest floor of the hangar bay.

Cuts to John-117 engaging Covenant troops in a jungle. Cuts to a group of Flood combat forms fighting a lance of Jackals and Grunts in the Flood containment facility.

Cuts to a blue team player firing his Rocket Launcher at two red team players in "Battle Canyon". Cuts to "Penance", a player performs an Assassination on another player.

Cuts to the campaign level "The Library", the index chamber, fading to the upgraded version in Halo: Combat Evolved Anniversary.

Cuts to a Warthog crossing a bridge on the map "Ridgeline", the remake of Timberland, in Anniversary.

Cuts to Installation 04 in the Soell system.

Cuts to the campaign level "The Truth and Reconciliation", John-117 and Fire Team Charlie levitates up to the cruiser via the gravity lift. Close up on John-117.

John-117 zooms up into the cruiser.

The logo of Halo: Combat Evolved Anniversary is shown.

The logo shines, and the date of its release appears:

Video ends as the Xbox 360 logo is shown.