Infinity is the fifth campaign level of Halo 4, and the fourth one with actual gameplay.

John-117 arrives at UNSC Infinity's crash site to find UNSC forces overwhelmed by the Prometheans. After searching and finding a few squads of dead Marines, John eventually meets Thomas Lasky and Commander Sarah Palmer. Captain Andrew Del Rio orders ground teams to return to Infinity to repel the attackers, but Lasky cannot clear a landing zone. He asks John-117 to clear a landing zone for the UNSC forces in the swamp. John-117 finds an area occupied by the Covenant remnant, who have joined the Promethean forces, and clears it for a landing zone.

John-117 is then taken by a Pelican to Infinity's crash site, where he, along with several Spartan-IVs, clear a path to Infinity's hangar bay. Once he enters the ship, John-117 pilots a Mantis and heads through the service corridor to the top side of Infinity, where the Covenant remnant has set up three jammers to prevent the ship from firing her weapons at the Didact and the Covenant remnant's cruisers. John destroys the jammers, and holds out until he can reactivate the Infinity's MAC cannons. With Infinity's weapons all firing at his Cryptum, the Didact retreats after two Covenant Zanar-pattern light cruisers are destroyed. 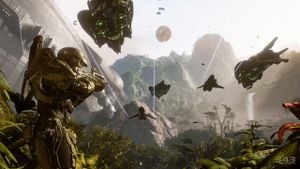 Fade in to John-117, traversing a forest on his trek towards the grounded UNSC Infinity.

John hides himself beneath a tree as several Phantoms and Banshees speed towards the Infinity. The Didact's Cryptum holds position above the ship, sending out periodic scans over the hull.

The transmission breaks up, leaving only static.

John looks on as the Cryptum continues to scan the Infinity. Fade to black.

Another aerial squadron passes overhead while the Didact continues with his scans.

If the Chief approaches the cliff:

John turns around and heads deeper into the jungle.

John continues on and reaches an opening between the trees, leading to a small clearing in the jungle. Three Promethean Knights phase away from the area, leaving three Marine corpses.

John accesses one of the corpses' IFF tag.

John pushes on, fighting Prometheans, including Crawlers and Crawler Snipes. He reaches a small hilltop, where a Marine is being held in a chokehold by a Promethean Knight. The Marine defiantly shoves a grenade into the Knight, taking the Promethean with him. A small module is left behind after the Knight has dissolved.

John picks up the Promethean vision module. He activates it, tinting the environment in blue; the Promethean hostiles patrolling below him are highlighted in red.

John pushes on, eliminating the Prometheans he encounters.

Another fallen Marine lies ahead. John accesses the nearby tag.

John continues on deeper into the jungle.

John arrives at the entrance to a Forerunner structure, hidden beneath thick foliage. A stack of UNSC crates and weaponry lies outside the doorway, along with an IFF tag. Unlike the last tags, there are no nearby corpses. 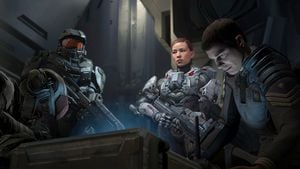 Two SPARTAN-IVs exit as soon as the doorway opens, led by Sarah Palmer. They secure the area behind John as he observes them. Lasky approaches John.

The Commander shakes the Chief's hand.

John stares at her wordlessly. Behind them, a radio sputters to life. The transmission is laced with static.

John and Lasky walks back inside, the SPARTAN-IVs following shortly after. The entrance seals itself behind them.

Lasky kneels down next to the radio, while John and Palmer stands guard.

The transmission cuts off.

Lasky stands up, facing the Chief.

John, accompanied by two Marines, leave the structure. Behind him is the third terminal.

After engaging a small Promethean contingent, the squad moves forward.

A conversation can be heard from a nearby UNSC radio.

The transmission dissolves into gunfire, then static.

John pushes on and encounters a group of Marines, who are taking cover behind rows of sandbags while Prometheans assault their position.

John joins the Marines, pushing back the advancing Crawlers. The Marines stare at the Chief in awe.

If the Chief takes too long securing the area.

The squad clear the area, only to find a locked exit. Several dead Marines lie nearby, having failed to hold off the Prometheans.

John uploads Cortana into a nearby pedestal.

The UNSC forces defend the hill top. Marines man the machine gun turrets on the top of the hill and fire at the assaulting Prometheans, who send out wave after wave of infantry at the defenders.

The majority of the Prometheans are eliminated. The Marines stay behind as John moves into a small cavern.

John retrieves Cortana and enters the cave. His HUD is again distorted by static as Cortana deteriorates.

The tunnel leads to an open cavern. A Promethean Knight stands guard at the exit. 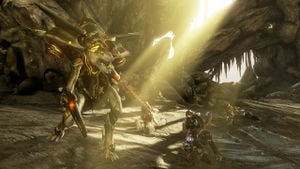 The Prometheans and Covenant remnant are now allies.

The Knight appears to be giving out orders to nearby Unggoy.

John attacks the Prometheans and Covenant remnant troops, which include a significant number of Unggoy, Kig-Yar, and even a Kig-Yar Sniper.

Phantoms arrive to drop off more Covenant troops, while several more Knights teleport into the cavern.

John eventually clears the area. A Pelican approaches the landing zone, opening its back hatch. 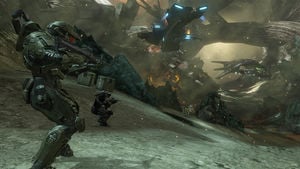 John fights alongside the SPARTAN-IVs.

The Pelican drops John off in an open canyon, choked with dust and debris from the crashed Infinity. SPARTAN-IVs are engaging nearby Covenant infantry.

John boards a nearby Scorpion.

Two SPARTAN-IVs board the nearby Warthog, while the rest ride shotgun on the Scorpion's treads. The assault force pushes through heavy Covenant fortifications, including Wraiths, Ghosts, deployable lookout towers, and infantry.

The assault force eventually arrives at a route leading down to a cargo elevator. Three SPARTAN-IVs are defending it against a Wraith and several Ghosts. The Chief provides assistance, disposing of remaining hostiles in the area.

The Chief enters the platform just as a large chunk of debris collapses, blocking the exit. The elevator seals itself and takes him up to hangar 2-19. More Spartans are combating Covenant forces, including a pair of Mgalekgolo.

Together, the Spartans clear the hangar of Covenant troops.

A doorway on the right opens, leading into a large chamber.

If the player ignores the doorway and walks to the far end of the bay:

If the player climbs the left catwalk:

If the player moves past the console and approaches the far doors. 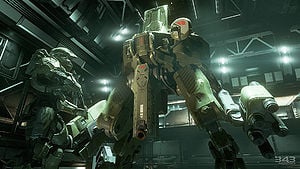 John-117 discovers his direct ticket to the Didact.

A circular plate in the room's center splits in two, and a Mantis emerges from below. John boards the bipedal mech.

John, using the Mantis' armaments, destroys the hatch. He engages the Covenant and Prometheans occupying the maintenance causeway.

John pushes on, wiping out Covenant forces infesting the causeways. Promethean Knights regularly phase in, but are easily killed by the Mantis' weapons.

John reaches the door to an elevator.

John enters the elevator, eliminating a lance of panicking Unggoy. 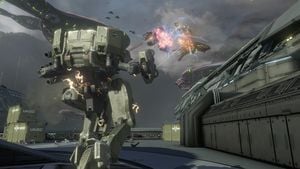 John fights off the Covenant in a Mantis.

John leaves the hallway and arrives at the upper hull. The Cryptum is hovering directly in front of the Infinity, scanning the ship's systems. Eight Covenant Zanar-pattern light cruisers are holding position over the ship, sending swarms of Phantoms and Banshees against the Infinity's Pelicans. The ship's point-defense weaponry are all offline, courtesy of the three jammers lying on the far side of the area.

John destroys one of the jammers. The cannon behind the jammer activates and begins to fire at approaching Phantoms.

John destroys the second jammer. Another anti-air gun reactivates itself.

Even more Phantoms arrive, sending waves of Covenant infantry against the Chief. Many Sangheili Rangers and Unggoy wielding fuel rod guns attack the Mantis. The Cryptum moves closer towards the ship.

More Phantoms land and deploy troops to attack John. By this point, the Infinity's missile batteries have been reactivated.

Banshees and Phantoms push on to attack the ship, but most of them are destroyed by the anti-air defenses. The rest are neutralized by John.

The Infinity's defenses eventually cripple two of the light cruisers, setting them ablaze. The two ships begin to lose altitude.

If Covenant stragglers remain present on the hull:

John approaches the MAC network's control panel and activates it.

The center MAC gun on the hull's platform reactivates and takes aim.

All of the Infinity's broadside defenses fire at Didact's Cryptum; a formation of Broadswords charges at the sphere, guns blazing. After taking several shots from the Onager, the Cryptum retreats into the jungle. 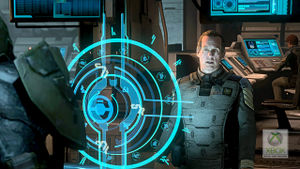 Captain Del Rio, showing the coordinates that led his ship to Requiem.

The Infinity, damaged but intact, manages to take off. Captain Del Rio, Lasky, John and Palmer have gathered in the bridge, with Cortana at the holotank.

Cortana projects a hologram of a Knight on the table.

The Captain turns to his XO, annoyed.

Lasky brings up a hologram of a Halo installation.

The hologram shifts into an asteroid belt, with a UNSC facility built into the largest rock.

The Captain brings up a new hologram: dozens of Forerunner glyphs arranged in a circular pattern, converging around the Didact's symbol.

Commander Palmer approaches Del Rio, handing over a tablet to him.

The Chief is caught off-guard by Del Rio's orders. 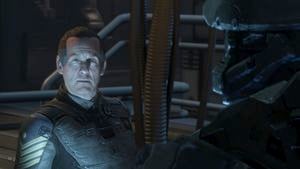 Captain Del Rio confronts the Chief over their conflicting priorities.

The Captain glares at the Chief one last time before leaving.

Del Rio departs from the bridge, leaving John and Cortana behind.