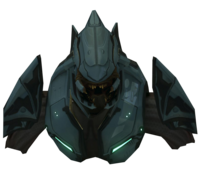 The upper components of the harness in use in November 2552.

The combat harness is the standard armor system used by the Sangheili soldiers of the Covenant and its splinter groups. The armor is made primarily of nanolaminate plating[1] and comes in several variations based on occupation and personal taste.[2]

The combat harness is worn by the majority of ranks from Sangheili Minor to Supreme Commander, with the damage each can take and the armor's shielding increasing in power with rank (with the exception of Stealth Sangheili), and comes in a variety of colors denoting said rank.[3] Following the fall of the Covenant combat harnesses did not always adhere to a strict color coding.[2] The combat harness became less frequent in the period following the Covenant's collapse, instead being replaced by the Storm harness. Still, the combat harness saw limited use among some remnant factions, such as Merg Vol's, Jul 'Mdama's, and Sali 'Nyon's Covenant.

The armor's nanolaminate plating and undersuit boosts the strength and speed of the wearer in a similar fashion to the Spartans' MJOLNIR armor.[4] Some versions have active camouflage built in,[5] others have flashlights,[6] and other versions have an energy dagger built into the gauntlet.[7] Its primary emphasis, to be iconic and inflict psychological trauma, can be linked back to the martial/physical preeminence of the Sangheili people. This helmet has remained unchanged for eleven hundred cycles, and the thoracic cage has remained unchanged for fifty generations.[8]

Some harnesses include a failsafe in case the wearer is infected by a Pod infector; when activated, it will explode and kill any Pod Infectors nearby.[9]

Harness patterns would be commissioned by particular fleets or shipmasters, which led to a great deal of variation in visual aesthetic.[10]

The UNSC-developed Saturnine VISR is fully compatible with the combat harness' power and data feeds, leading some to believe it's intended for export.[11]

The helmet is largely angular, featuring a set of spikes at the rear of the helmet and a pair of cheek guards. It features a metal plate guarding each mandible.

The shoulder pauldron is a set of overlapping plates that spike upwards, downwards and to each side.

The thoracic cage is made up of a pair of plates over either side of the chest with a gap between them and a pair of rectangular lights angled downwards on each side.

The armor used by the Elites in Halo: Combat Evolved has a few differences from the armor used in later games. Some Elites have a "curled-back" headpiece, different thigh armors, and smaller shoulder pieces. They also have shoulder armor with a three-pronged design. In addition, they have orange glowing sections on their arms and legs, which often give away their position. Their eye color is also the same as their armor color; a Minor with blue armor will have blue eyes, for example.

In Halo 2, there are no curled headpieces and the eyes are not the same color as the armor, rather a dark purple or black color. Also, the shoulder pieces are larger than in the previous game. They also have glowing orange sections on the backs of their legs and on their arms which act as shield indicators, glowing brightly when the shield is fully charged and dimming or going out altogether depending on shield level.

In Halo 3, the armor now features larger shoulder pieces, longer and more numerous spikes on the headpiece, and a small tube connecting to each mandible guard. The tube is only included in the Halo 3 incarnation. There are also downwards-angled lights on both sides of the chest plate. The large orange shield indicators are replaced by two small green lights on the harness' back and chest plate, which are dull when the shield is fully charged and glow bright when the shield is depleted.

In Halo Wars, the Elite's armor is more reminiscent of the Halo 2 version as opposed to the Halo 3 version. The shoulders are much more rounded and the coloring in the armor seems worn out.

While the Elite combat harnesses in Halo: Combat Evolved Anniversary are identical to the ones in Halo: Reach the combat harness is different from the earlier iterations in a number of ways. The other types are also much more varied, depending on the Elite's rank or specialty. Only the Minors' armor greatly resembles the combat harness seen previously. An addition to the armor is the energy dagger which is emitted by the gauntlet when the wearer performs an assassination.

The Elite's HUD compass has Covenant markings instead of cardinal directions. Night vision uses a purple color, as opposed to the green color used by Spartans. The Elite's HUD also features a target tracking system when used with compatible (Covenant) weapons.

In Halo 2: Anniversary, unlike in Halo: Combat Evolved Anniversary, all of the Elites (with the exception of Councilors, wear the same kind of combat harness albeit with different coloring depending on the rank.