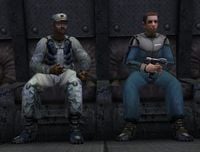 Crewman Glitch. The crewman seems to be using an invisible MA5B Assault Rifle.

Glitches are errors or bugs in any program that can cause undesired or interesting results. Glitches in video games can often be exploited to gain practical advantages. In the Halo games, glitches are often used in such a manner, and for that reason they are documented quite extensively on some websites. An expanding list of glitches in the Halo games can be found here.

Glitches in Halo: Combat Evolved typically required the bypassing of invisible walls or the forcing of objects into areas they were not meant to be brought into. Some animation glitches also occur.

In Halo 2, players could do things such as super jumping or super bouncing (Xbox only), get past invisible walls to get out of maps, etc. "Button Combos" also existed, such as one that would allow you to kill a player instantly.

In the level, Delta Halo, there is an excessive amount of glitches. For example, there are many cracks and errors in the invisible barriers surrounding the playable areas of the level that enable the player to skip an amount of the level, explore the distant hills, and even get under the lake, on foot, in a Ghost, or in a Warthog.

Halo has been combed over for glitches by a considerable amount of players, but Bungie has put much effort into making sure that there are few, if any, in Halo 3. There are a few that do exist in active gameplay though, such as the Mine Glitches, driving an AA Wraith, going under the playable area of Construct, Fusion Coil glitches, and the Elephant speed boost. Another glitch in Halo 3, one that effects machinima more than gameplay, is commonly referred to as The Bump.

The introduction of the Theater made it easier to find glitches in animation and rendering; its hidden Pan Cam mode introduced some others. The new Forge mode allowed for a large amount of physics, environment, and other gameplay glitches. The use of a new game engine introduced many kinds of glitches that were not present in the game's predecessors.

On the other hand, Bungie cracked down on glitches during Halo 3. Numerous steps were taken to prevent them, including what appears to be an algorithm that detects if items have bypassed the level boundaries. This algorithm is used to delete "lost" Forge items, kill players that exit the map, and return the Theater camera to the nearest living player if it exits the map.

There are very few distinct glitches in Halo 3: ODST this is because it uses the same engine and graphics as Halo 3 and the same glitches apply.

Being an RTS, there are very few Halo Wars glitches.

Bungie really hunkered down on many glitches in the development of Halo: Reach. However, there are still many glitches present in the final version of the game, though considerably fewer have been discovered than in other games.

One example of a glitch is dubbed the "Stubborn Rider". This glitch can be performed on Legendary Warzone Firefight. If a Ghost riding Elite boss jumps out of his vehicle to hijack another, have your friend shoot at it with locking missiles when you jack it back. It will result in the Ghost's destruction, yet you will still be riding it.