The three Johnsons glitch is a simple glitch that can be performed on the Halo 3 Campaign levels Sierra 117 and Crow's Nest. The glitch causes multiple instances of Sergeant Avery Junior Johnson to spawn on the level. 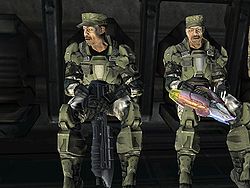 Two of the three Johnson in Kilo 023's troop bay.

Start from the beginning of the level. Go to the waterfall and wait for Johnson. When he stops and looks at you, shoot him in the head. Quickly proceed to kill the enemies that deploy from the first Phantom, and get a loading point and/or checkpoint. Then, return to the first Johnson.

It is also possible to use two controllers to get two Sergeant Johnsons when starting from Rally Point Bravo. First, have the Master Chief climb on top of the building where Johnson is being held captive. A Phantom will arrive shortly; Chief should kill the gunner, jump into the Phantom, and hold RB to operate the Plasma Cannon. This will render the Phantom, but not the Chief, invincible. The Arbiter should protect Chief by killing all enemies, and then enter the building and release the captive Sergeant Johnson. The Johnson seen earlier will spawn at the Pelican carrying an Assault Rifle, and the second Johnson will be carrying a Needler.[clarification needed] Once the Chief dismounts the Phantom, the Pelican's missile barrage will destroy it.

Start from the beginning to the level. Melee the first Johnson to the hangar. If you like, you can drop a weapon at his feet, and headshot him to get him to pick it up. After you clear out the Covenant forces in the hangar, melee him back to the Ops Center, where you will find a second Johnson. Melee both Johnsons into the barracks; bring the second Johnson there first, to ensure he isn't deleted.

You'll reach the third Johnson when he is about to board a Pelican; there are two ways to keep him around.

If you headshot him after all of the nearby Marines have entered the Pelican, then you will be able to prevent him and the Arbiter from being removed from the level. However, if further action isn't taken, then the Arbiter and the third Johnson will vanish when you reach the room with the Plasma Cannons, leaving you with two Johnsons to melee to the end of the level.

If you use a Deployable Cover to stop the third Johnson from boarding the Pelican, and then melee him to the destroyed Warthogs, then he will stop trying to reach the Pelican. At that point, you can destroy the Deployable Cover and melee the other Johnsons over to the third one, leaving you with three Johnsons to melee to the end of the level.

When proceeding through these levels normally, Sergeant Johnson is deleted from and re-added to the levels several times. Each time he and the player get separated, Johnson is removed from the level, and each time he and the player are reunited, it is the result of the game spawning a new Sergeant Johnson. Killing Johnson, however, tricks the game and prevents his removal—either by directly stopping him from being deleted, or by interrupting his behavior and preventing him from performing actions that would lead to his deletion. When the game spawns new Sergeant Johnsons later, it does not check to see if the previous Johnsons were successfully removed.

In some cases, it is possible to preserve a Sergeant Johnson by moving him rather than killing him. In Crow's Nest, meleeing the first Sergeant Johnson out of the Ops Center is enough to save him, presumably because the game only attempts to delete Johnsons that exist in that area (rather than deleting all Johnsons on the map).

In any case, this is the same glitch as the Life After Death glitch and the Two Arbiters glitch (when the latter glitch is performed on The Ark or Halo).

The player can kill the Johnsons that spawn with Battle Rifles any time, making them useful as an infinite supply of Battle Rifle ammo.