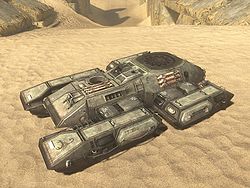 The turretless vehicle glitch is a glitch that typically removes vehicles' armaments present in Halo 3's Forge. The glitch can be replicated in Halo: Reach, though it is considered more of a gameplay element than an actual glitch.

In Forge, enter Edit Mode and bring up the object menu by pressing X. Scroll to the Vehicles category, and move the cursor over whichever vehicle you wish to perform the glitch on. Get the party leader to start a new round. Just after "Round over" is heard, the screen will fade to black, and the menu will stay up for several seconds after "Round over" was uttered.

As soon as the screen goes completely black, spawn the vehicle—if you spawn the vehicle too early, it will spawn normally, but if you wait too long, the menu will close automatically. When the new round has started, go to the spot that you were previously standing. The turretless vehicle should be in the position you spawned it in. The vehicle will only remain in its turret-less state for that particular round.

If you start a new round, end the game, or save the map with the turretless vehicle and load it again in Forge or in a Custom Game, the vehicle will be in its normal state.

The connection host cannot perform this glitch, as it depends on a communication error. Specifically, a client spawns the vehicle, but the host starts the new round before the vehicle's turret can be spawned with the vehicle (a vehicle and its turret are two different objects).

This method does not affect Elephants because the Elephant is not an object that can be spawned in Forge.

This method must be used if you are planning to make the Elephant Turretless.

In Forge, you'll need two players in the game, one in Edit mode, the other in Player mode. The Player in Edit mode should press "X" then spawn the vehicle you want to be turretless then press "Y" to delete it,, that will make it selected in the list, Player 2 should then press "Start" to open up the pause menu and highlight "start new round" Player 1 should press "X" and Player 2 should press "A" at the same time. If done correctly the Forge list will appear in Player 1's screen while the game starts a new round, after the screen goes black Player 1 should press "A", when the new round starts the vehicle will be turretless.

The method is easy to use when not on Xbox Live and can be used when not connected to Xbox Live.

This method does not affect Elephants because the Elephant is not an object that can be spawned in Forge.

While not technically a glitch, players can also replicate the same outcome in Halo: Reach. The easiest method is to spawn a Kill Ball and place the vehicle just inside the Kill Ball, such that the turret itself is inside the kill ball. The turret will pop off or just disappear, and the player will be left with a turretless vehicle. Alternatively, the same could be achieved by applying enough damage by means of heavy weapons on the turret of the vehicle. This method also works in Halo 4, although it will only affect some vehicles.

The glitch may also be created by splash damaging the vehicle with a spartan laser, but will recover upon respawn.

The vehicles lose their turrets. Warthogs gain a resemblance to Civilian Warthogs or Scout Warthogs. The turret mounts remain on the Warthog in Halo: Reach.

The vehicles lose their cannons and turrets. The alterations made to Zurdo-pattern Wraiths are quite striking, as the mortar launcher comprises a large portion of a Wraith's rear. In Halo: Reach, the Wraith's turret will not fall off.

The weapons are disabled.

Weapons are disabled in Halo 3. In Halo: Reach, they gain no effects.

Weapons have been disabled. Hornets gain a resemblance to Transport Hornets.

The side mounted turrets disappear.

The Elephant loses its turret, and the horn has been disabled.