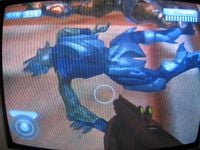 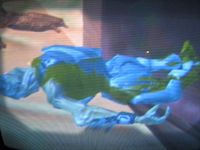 The blue-green variant of the Jackal.

The Blue Jackal glitch is a lighting phenomenon that can be seen in the Halo 2 Campaign level Metropolis; it can sometimes also happen in Regret. As the name suggests, it causes the corpses of some Jackals to turn blue.

In Metropolis, kill a Jackal on the Scarab. If it is on the right place, it will appear blue, as though it were inside the Scarab's tech innards. This is the result of a lighting glitch; a part of the Jackal's corpse is "inside" the Scarab, so the game assumes that the entire Jackal is in the Scarab's interior, and lights it accordingly. Meleeing the body will cause it to change to other colors, strangely including yellow and red. Shining your flashlight on the affected corpses will temporarily revert them to normal.

When you hear a Marine say, "Full car coming up," in the room where you fight the Drones, throw a Plasma Grenade down the lift before it comes up. When you get to the tram's destination, the Drone corpses may be blue.