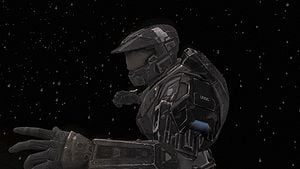 The unknown Spartan, zoomed in.

The Spartan in the Autumn is a Spartan Model found in Halo: Reach, on the campaign level "The Pillar of Autumn".[1] It was confirmed by Bungie to be a technical glitch, not an Easter egg.[2]

The Spartan is hidden in the same hangar that Captain Keyes' Pelican docked in during the ending cutscene. The Spartan is wearing a Mark V helmet with a black visor and no attachments, Mark V shoulders (with a UNSC tag similar to that on FJ/Para shoulders), Mark V[B] chest with a robotic arm, FJ/Para knee guards, no wrist guard, and no utility.[3][4] Oddly, its armor is completely jet black, a color which cannot be selected in-game. The spartan appears to be a model created using in-game assets inaccessible to the player; It is fully textured and rendered and can be seen “breathing” like a player controlled character would.

The hangar on the left contains the Spartan.

Activate Pan Cam during gameplay, and go to Theater to play the clip. Zoom in on the left side of the Autumn, near the second yellow crane (from the gameplay area's perspective). Try to pass through part of the hull. Once you've reached the solid barrier on the ship, find the last hangar to the left. While the Autumn is a solid object that cannot be bypassed even with panoramic camera mode, so the player cannot see the figure properly, at a certain point in the mission the Autumn will deload (or disappear) and the pan cam can be moved to where it would have been. Thus, when the Autumn reappears again later in the mission, it is possible to get a good look at the spartan. While in the Autumn, the pan cam will continuously be pushed backwards until you are pushed out of the Autumn, so making videos or screenshots of the spartan is difficult(but not impossible). The Spartan can be seen in the hangar's right corner. After the cutscene where Emile-A239 is killed, the Spartan will disappear, likely due to the area being used during the next cutscene.