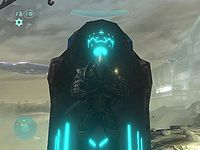 The drop pod glitch is a Halo 3 campaign glitch that allows players to enter an Orbital Insertion Pod while playing on the level Floodgate. The glitch can only be performed on co-op, as only Elites (the Arbiter, N’tho ‘Sraom, and Usze ‘Taham) can enter the pods.

Play up to Rally Point Alpha and get a checkpoint in a co-op game. Then, get anybody other than the Master Chief to press RB near each of the drop pods. Only one pod, "selected" at random, can be entered; when the player finds the right one, they will climb into the drop pod.

It is possible that the Orbital Insertion Pod was made a vehicle to make coding the Elite reinforcements' entrance more convenient. That is, Bungie may not have wanted the Elites to attempt to fire upon the Flood (or worse, throw grenades) while in the pods, so they simply used a mechanism that was already in the game (vehicles) to force them to remain still. Using a vehicle would have had the convenient side-effect of allowing Bungie to easily force the Elites into the riding-in-a-drop-pod pose.

There is also the fact that using a vehicle would have been the only way to make the Elites stay still and use a custom animation.

The reason that the Master Chief cannot enter the pods is because he lacks the required animations. It is the same reason that unmodified (but allied) Grunts from Halo: Combat Evolved (PC port)'s Campaign cannot enter Warthogs in modified Halo Custom Edition maps.