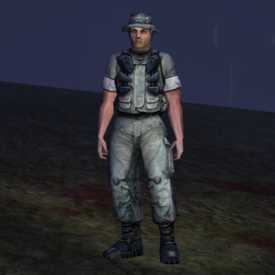 A Marine without a weapon in Halo: Combat Evolved.

The Unarmed Marines are the marines who appear in the Halo games without holding any weapons. Normally, they should be armed, but usually due to the conditions of a glitch, the weapon is not visible.

You can see an unarmed Marine on Halo: Combat Evolved on 343 Guilty Spark if you accomplish the trick to board the Pelican that has just dropped you off. Simply Explosive Jump yourself to stay in the Pelican. You can travel over the map; then, on top of the building where you first meet the Flood Combat Form, there is a marine you can drop to. He is unarmed, and does not use an animation that would suggest he is meant to hold a weapon. This is an Easter egg.

There is also a similar glitch where the very last Marine in all Pelicans has no weapon, but their hands are in position of wielding an Assault Rifle.

During the level Cairo Station, at the part where Johnson and Commander Miranda Keyes and two Marines are fighting off Covenant, you can actually take away a Marine's weapon. First, kill all the Covenant. Then, when a Marine fires his SMG at a body, swap weapons with him (it works best if you have an M6C Magnum). With luck, the Marine will not pick up the pistol and will run around without a weapon. It is possible to do this on other levels. Also, If you have an SMG as a secondary weapon and a pistol as a primary weapon, and trade the pistol for a marine's SMG, he will not receive the pistol and the marine will drop the SMG and be unarmed. This is rare and is best done on Cairo Station.

On the level Metropolis, it is possible to find a Marine without a gun. Fight your way through the level until you get to the area where Cortana says, "There are some marines trapped in that building. Concentrate on the Wraiths, they're the biggest threat."

Keep fighting until the doors to the base open. Then carefully reverse park a Warthog or Ghost near the door. Head up the first flight of stairs, then halfway up the second, then head back down to the entrance. If done right, the Scarab should approach. Quickly jump into your vehicle and head to the Scorpion Tank. Get out and kick the driver out of the tank, saving the tank from destruction. If you look at the driver, he will have no gun. This Marine will not take any weapon you offer him. Also, if you get him inside a Warthog, his body will float out of his seat; this is because his death is "scripted".

Commander Miranda Keyes in The Great Journey has no weapon, and will not take one, although she frequently crouches and holds her hands out as if she does.