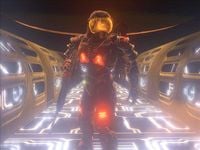 A player beneath a base floor.

When playing Halo 3's Multiplayer map Snowbound on Forge,[Notes 1] it is possible to glitch through the ground into a blue room hidden underneath a glass floor inside one of the bases.

From there, they (Person A) must go to the base with a room under the floor. They will need to bring a friend (Person B) with them. The two will perform a variation of the Forge turret glitch.

Respawn points can be placed in the room.

This method requires two players to cooperate over Xbox Live; the two players will need to figure out which one of them is the "host".[1]

First, the two players must overload the map. Then, the glitch may be attempted.

The player that is not host should spawn a Receiver Node and place it on the glass floor. They should then button-mash A until the Teleporter sinks beneath the floor. Once that is done, the player can spawn a Sender Node and use that to get in. This method works in other parts of Snowbound, including the Karo'etba-pattern Ghost/Mongoose spawn point.