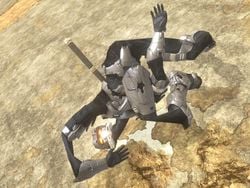 A Spartan's body, mangled after falling from high altitude in Sandtrap.

The character stretch glitch is a glitch that occurs in many Halo games, where an in-game character model is stretched to a physically impossible extent.

This glitch appears for the first time in Halo: Combat Evolved. Whenever a corpse's body part hangs off an edge, the body part stretches at very awkward angles. An extreme case of this can be witnessed on a level where there are stationary energy shields. If a player standing on one dies, and the shield goes down, the body will float in midair in an extremely contorted manner. This is due to the fact that in Combat Evolved, dead bodies are coded to sag downwards when they come to rest on the ground; if part of a body is hanging off the edge of something, it will stretch out far further than the species would actually be physically capable of. If the body rests off a ledge, the programming of the game tries to bring part of it down to a solid surface, but if the center is on a surface than the game engine won't make the body fall off the ledge. It also seems that Marines' mouths are stretched to an impossible limit sometimes when they die.

On Halo 2, one method of doing this is on the multiplayer level Midship. It requires two players. Where some ramps lead up to the higher level, there seems to be some sort of shield generated from blue plasma. Have a player crouching behind it (on the platform) and have them melee the shield, preferably with the Energy Sword, and then assassinate the other player. There is a 10% chance that when the player dies, his/her neck will stretch through the shield. Other outcomes include spasms in the player's corpse, or a combination of the spasms and the long neck (although the chance of this happening is very low). The other 90% of the time, the character's model will "air swim"—its arms will shake in a swimming fashion.

Also, in the campaign level Gravemind, it is possible to stretch Grunt corpses. To do this you must wield a Brute Shot, and when clearing the Covenant jails, melee the Grunt bodies into the cells. There should be a small pit at the back of the cell, and meleeing the Grunt bodies to the invisible wall should stretch their limbs past the invisible wall. If you continue to melee, the body should fall into the pit. Other character models including Jackals and Elites will stretch as well. 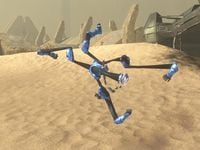 Only the flexible parts of a character's armor are affected.

The glitch is most noticeable in Halo 3. If a player hits a solid object such as the ground, a wall, a pillar, a ledge, or a ceiling with a lot of force, there's a chance that their corpse will stretch at bizarre angles, such as their heads and arms being underneath their body for split seconds. This can be easily witnessed in Theater. It should be noted that the more inflexible components of a character's model, such as the head and armored parts, do not stretch; it only happens in the areas between the joints.

Methods of launching bodies against surfaces at high velocities include being smashed into a ceiling by a Trip Mine or other explosive; being sent flying by a fast-moving vehicle such as a Banshee; or being struck with a well-placed Energy Sword or Gravity Hammer blow.

There are other chances of this happening. In the Halo 3 Beta, a body stretch glitch causes the player's head to be stuck in the platform on the starting bases of Valhalla. Occasionally your arm will get stuck in the fence or something to that degree but not often. There is also photographic evidence of a neck stretch on Sandtrap.

Some claim it has also been caused by lag.

This can also be seen in the Halo 3 campaign. When you destroy a Scarab Tank's power core at just the right moment, you occasionally get shot into the air. If you clear the map boundary, your limbs will all stretch for a second or two. Another way to see this is when in theater mode on the level Halo: when a player falls through one of the platforms, pause as soon as the player hits the ground. Go up to the body and most of the time, the player's neck and/or other limbs will be stretched. Marines sometimes also stretch if caught in an explosion.

Another way of doing this is on a map that has a high boundary, such as Sandtrap—simply make your body fall from a great height. This can be done by making a floating platform high up, standing on it and dying so your body falls off. When your body hits the ground, it's very likely that it will stretch.

Another Scarab Tank method involves shooting the Scarab's knees until it stops moving. While it is immobile, jump on a "kneeflapcap" or anywhere on the Scarab's leg and wait for it to start moving again. As soon as it lifts its leg, you will be sent flying really fast and if your lucky enough to hit a solid surface, you will stretch almost every limb in your newly-made corpse. For better results, try standing right on top of the "kneeflapcap" so you will be shot straight up. You should hit the invisible ceiling and stretch violently.

The latest game that appears to have this glitch is Halo: Reach. However, the chance of appearing during gameplay is significantly reduced.

The glitch as seen in Reach.