The results of the Two Arbiters glitch.

The two Arbiters glitch is a glitch that can be exploited in many Halo 3 Campaign levels such as The Ark, The Covenant, and Halo. The glitch, which can only be performed in single-player, causes the Arbiter to be duplicated for a part of the level.

When you have de-activated the third tower, get in the scorpion tank before the Arbiter gets in the Phantom and blow it up while he's in it. The Arbiter won't leave the level like he's scripted to, and after the second comes down from the Phantom, it won't have a waypoint above his head. The second one may be teleported when you get to certain parts in the Citadel.

Another method simply requires that you kill the Arbiter just as Truth starts speaking, immediately before the cutscene when you enter the Citadel after defeating the two Scarabs

Four Arbiters Glitch on The Covenant[edit] 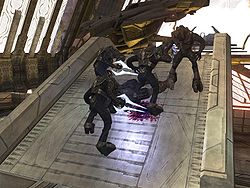 The results of the Four Arbiters glitch.

The Four Arbiters glitch can only be performed on the Halo 3 level The Covenant. This glitch is a combination of three methods (one previously unknown or unexplained) used to attain a second Arbiter. This is also a strategy guide which will help you set up a nice battle between the four Arbiters and up to 10 Brutes (12 on Easy) and 2 Grunts (Heroic and Legendary only). You can see the video guide here.[1]

Before you go up the elevator to deactivate the third tower's barrier, you will need to have picked up a headshot-capable weapon, a Fuel Rod Gun, and if you're playing on Normal, Heroic, or Legendary, a Beam Rifle (leave it outside). If you started at Mission Start, and the difficulty is Normal, Heroic, or Legendary, pick up the Active Camo; you can find it near the first tower's entrance.

When you have deactivated the third tower's barrier, run past the Flood and activate the elevator. When you come down, you should see Arbiter and any surviving Elites in combat with the Flood. Help them kill the Flood. Now melee Arbiter's shield until his shield goes down. Then go in front of the glass screen and headshot him. Go past the glass screen. You should see a waypoint; a second Arbiter will be spawned with an Energy Sword as his primary weapon. On Heroic or Legendary, headshot and/or melee the Flood combat forms that ambush you at the door and stick the Carrier Forms with spike grenades, since the grenades are abundant in numbers on this level. Or let the newly spawned Arbiter and the Elites kill them. Don't leave the tower after the Flood are dead. Wait for the first Arbiter to get up and exit the tower.

Then head outside; Flood Infection Forms should spawn and you should see a Separatist Phantom. Kill the Infection Forms but don't go down to the Phantom. There is a loading point that will cause Arbiter to get on the Phantom. Destroy the Phantom with the Fuel Rod Gun. Four shots to the Phantom's frontal bulbs and/or tails (the damage is linked) will destroy the Phantom on any difficulty. Headshot the Sergeant. On Heroic or Legendary, stay out of sight for a while or your allies will turn on you. Then go down and you'll get the loading point. Headshot the Marine wielding the Rocket Launcher. If you started at Mission Start, and you brought any Marines with you on the Hornet, headshot them, but once again, on higher difficulties, stay out of sight before you kill them. Killing the Sergeant and the Marine wielding the Rocket Launcher and any Marines you brought to the third tower will make sure the two Arbiters get in the Warthog. If you're playing on Normal, Heroic, or Legendary, retrieve the Beam Rifle you left outside. Now get in the Scorpion tank. The remaining Marines will get on the tank and the two Arbiters will get in the Warthog.

Drive the Warthog to the Hornets. It is possible to drive to the Hornets without killing all of the enemies; any enemy that didn't die will be instantly killed. However, the War Chieftain will be unaffected by this so try to run him over as you go. Kill the Marine Pilot who offers you his Hornet. You can also get the other Marine Pilot out and push him off the cliff (if you want to have a second Hornet to use just in case the first one is destroyed), but don't melee him or he'll ride on the Hornet. Or you can get him out and get in his Hornet, but you'll have to wait for him to ride, which could cost you the opportunity of boarding a Scarab. After you have killed the two Scarabs, the third Arbiter will be spawned. When you return to the Warthog, one of the Arbiter will usually be in the driver's seat. Get him out and get in the driver's seat and wait for him to get in the Warthog. Drive the Warthog to the waypoint. You'll get a checkpoint. Save and quit. If you have a memory unit, back up your game save.

Then resume the game and drive the Warthog to the Citadel entrance. Get the Arbiter operating the Gauss turret off and push and melee him off the light bridge. Get in the driver's seat to get the third Arbiter to hop in. Then get him off and do the same to him. Do the same with the last remaining Arbiter. Now all three Arbiters should be on the ground level and they should be stationary. Go down to them and push and melee each Arbiter into the Citadel separately. Once all three Arbiters are in the Citadel, go to the closed Forerunner door to trigger the Citadel's doors to close and a Cortana Moment.

After the Cortana Moment, you'll get a checkpoint. Check and make sure you're prepared. You will need a Beam Rifle and an Active Camo. It is also recommended to bring a headshot capable weapon and two of all four grenades. Also, are the three Arbiters inside the Citadel? If so, save and quit. If you have a memory unit, replace your previous gave save with this save. Resume the game and go to the closed Forerunner door to initiate the cutscene.

After the cutscene, you should see an Arbiter wielding the Plasma Rifle as his primary weapon and the Energy Sword as his secondary weapon; this is the fourth Arbiter. The fourth Arbiter cannot be killed during the fight with the Covenant. On Easy, let the Tank Forms do the fighting. On Normal, you should help them. On Heroic or Legendary, go the side and wait for the Tank Forms to die. After they have died, you have two choices. You can wait for the Covenant to take out Arbiter's shield or just melee Arbiter until his shield goes down. When his shield goes down, he will usually take out his Energy Sword. Thanks to his invincible state, the fourth Arbiter will easily eliminate the enemies on the first bridge. However, you have to stay with him or he'll switch back to the Plasma Rifle. On Heroic or Legendary, two additional Heavy Grunts wielding Fuel Rod Guns will be spawned. While Arbiter distracts and fights the Brute Captain, Grunts, and Jackals, go to the door to spawn the two Heavy Grunts. If you want to have the four Arbiters fight the Brutes in full force (12 Brutes on Easy, 10 Brutes on other difficulties), after all of the enemies are dead, kill the surviving Tank/Stalker Forms (melee the Tank Forms in the mouth) and the Human Combat Forms. Then jump on a supply case and jump onto the roof.

If you're playing on Heroic or Legendary, use the Beam Rifle to kill the Brute Bodyguards. Then go down and use the Active Camo when you get near the Brute Captain. Two Heavy Grunts wielding Fuel Rod Guns should pop up. If you want the fight to be in full force, don't kill them. Avoid the Brute Chieftain's swing, pick up a Regenerator, and pick up and use a Fuel Rod Gun or Brute Shot to propel yourself onto the roof.

When you get on the roof, look away from the Ark's control panel. The three Arbiters should spawn at the unactivated light bridge. Then go down onto the third bridge and go to the unactivated light bridge. The fourth Arbiter should appear. Now you have several options. You can either participate in the battle, watch the battle as a spectator, or hide. Find cover if you're playing on Normal, Heroic, or Legendary. Fortunately, there's a convenient hiding spot underneath the light bridge's activation panel. You can crouch and hide under there for the entire battle. You can also go next to the Plasma Rifle wielding Arbiter. He'll usually seek cover. If you turned on Cowbell, the Brute Chieftain will usually knock the Arbiters off the third bridge. To make them materialize on the third bridge, simply look towards the Ark's control panel.

Note: If you get an unwanted checkpoint, do not save and quit. Instead, press the Xbox guide button and sign out. Now you'll be able to resume from the last checkpoint you saved.

The Four Arbiters Glitch works on The Covenant, when the Flood arrive on the Ark, since the game is scripted to spawn the second Arbiter when it cannot detect the first Arbiter. This is why when you choose not to destroy the Anti-air Wraiths, deactivate the third tower, and go outside, the second Arbiter will be spawned regardless of your choice.

Cloning the Arbiter by killing him prior to a cutscene is merely a manifestation of the Life After Death glitch.

By using a Spartan Laser with infinite ammo to kill the Arbiter immediately before the fight with 343 Guilty Spark, players can duplicate the Arbiter. Outside the Control Room, after the battle, one Arbiter will be standing around, and the other will already be attacking the awaiting Flood; the latter has the waypoint above his head. Once near the end of the hallway, both Arbiters will stay back.