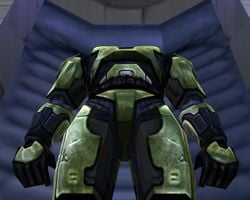 Sometimes the player will be pushed out, but the headless Master Chief can still be seen from outside the chamber at a certain angle. Also, if the player jumps on the cryo-chamber, it is possible that they will fall into the small space behind it. Doing this glitch will cause the player to be stuck in the pod, and they will have to restart the level to continue.

However, simply moving the third-person camera inside the Master Chief's head would cause problems. Backface culling would make much of the head invisible, but some chunks of the head would still be visible (and would render somewhat oddly). This is particularly noticeable with the two prongs at the top of a Spartan's helmet. Bungie avoided this undesirable visual effect by simply removing (or moving) the Master Chief's head during the scene where the HUD is first activated.

Forcing the Master Chief back into the cryo-chamber simply restores this state -- these effects (third-person point of view, invisible head, etc.) are all applied whenever the Chief is in the cryo-chamber, since (without the involvement of glitches) he is only in the pod before the cutscene where he exits.