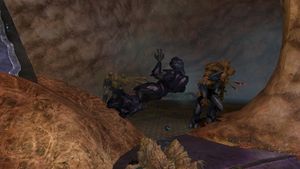 In Halo: Combat Evolved, on the Pillar of Autumn, when the player is going to the bridge, and they run into an Elite, there are some Marines shooting at him. Lead him through the door toward the Marines, and he will freeze. The player can walk through him and the Marines may not shoot the Elite, but if they attack him, it will sound as if the Elite were solid.

Also, when playing some other levels on Co-op, if one person kills an Elite at the same time that the other person hits a checkpoint, the Elite will sometimes freeze while falling (the margin of error is less than a second).

In Halo 3, a frozen Elite corpse can be seen in Cortana, in the infested High Charity. As the player travels through the level, they will find an Elite's corpse sticking out of the ground at an oblique angle. He is clearly dead, and can only be unfrozen by hitting or shooting him. This glitch happens because the Elite is partially inside the immovable ground, effectively locking its body in place. Sometimes, when a character falls to their death on this level, in the final part before blowing up "High Charity", their body will seemingly hover in mid-air while their grenades and equipment will continue falling.